#AceNewsReport – Sept.15: Monday, the House of Commons voted on a controversial new bill published by the government: It’s worth noting that the UK is currently in a period known as the transition, that keeps it bound to the EU’s rules until 31 December: The two sides are trying to negotiate a new trade deal that would come into effect once this period ends, but talks have reached an impasse: So, on a basic level, the government’s new ‘ Internal Market Bill ‘ seeks to prevent disruption to trade between the four nations of the UK if no deal is reached with the EU: The government has described it as a “vital legal safety net” ﻿ 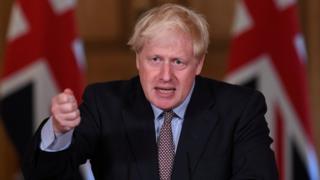 The Prime Minister’s opening statement at the second reading of the UK Internal Market Bill.

Mr Speaker, I beg to move that the Bill be read a second time

and this House acts to preserve one of the crucial British achievements of the last three centuries: namely our ability to trade freely across the whole of these islands.

The creation of our United Kingdom that has stood for centuries

was not simply a political event

and the prosperity we enjoy today.

When other countries in Europe stayed divided, we joined our fortunes together

and Devonshire Clotted Cream to Northern Ireland or wherever else it might be enjoyed.

And when we chose to join the EU back in 1973, we also thereby decided that the EU treaties should serve as the legal guarantor of these freedoms.

Now that we have left the EU, and the transition period is about to elapse,

we need the armature of our law once again to preserve the arrangements on which so many jobs and livelihoods depend.

That is the fundamental purpose of this Bill,

which should be welcomed by everyone who cares about the sovereignty and integrity of our United Kingdom.

including, of course, in Northern Ireland.

adding that we would – and I quote –

“maintain and strengthen the integrity and smooth operation of our internal market.”

This Bill is designed to honour that pledge and maintain those freedoms.

When we renegotiated our Withdrawal Agreement from the EU

while preserving an open border with Ireland

with the express and paramount aim of protecting the Belfast (Good Friday) agreement and the peace process.

while avoiding any change to the border on the island of Ireland.

in case they were transferred to the EU

and we are conducting those checks in accordance with our obligations,

creating the sanitary and phytosanitary processes required under the Protocol,

and spending hundreds of millions of pounds on helping traders.

Under this finely balanced arrangement

our EU friends agreed that Northern Ireland would remain part of the customs territory of the United Kingdom,

and ensuring that goods not “at risk” of travelling to the EU – and that is the majority of goods going from Great Britain to Northern Ireland – do not have to pay tariffs.

can only be resolved with a basic minimum of common sense and goodwill from all sides.

using the Northern Ireland Protocol in a way that goes well beyond common sense,

simply to exert leverage against the UK in our negotiations for a free trade agreement.

To take the most glaring example,

And it gets even worse.

Because under the Protocol this creates an instant and automatic prohibition of the transfer of our animal products from Great Britain to Northern Ireland.

Mr Speaker, are interlocutors on the other side are holding out the possibility of blockading food and agricultural transports within our own country.

Absurd and self-defeating as that action would be even as we debate this matter, the EU still have not taken this revolver off the table.

I still hope that they will do so

Indeed it is such an extraordinary threat – and it seems so incredible that the EU could do this – that we are not taking the powers in this bill to neutralise that threat but obviously reserve the right to do so if these threats persist. Because I am afraid these threats reveal the spirit in which some of our friends are currently minded to conduct these negotiations.

It goes to what my learned friends would call the intentions of some of those involved in these talks.

As things stands, there are other avenues – in addition to the blockade on agricultural goods – that the EU could explore if they are determined to interpret the Protocol in absurd ways and if they fail to negotiate in good faith, we must now take a package of protective powers in this Bill and subsequently.

For example there is the question of tariffs in the Irish Sea.

should pay the EU’s tariff as they cross the Irish Sea,

but any goods staying within Northern Ireland would not do so.

This sensible process was one of the achievements of our agreement

and our view is that this forum remains the best way of solving this question.

But I’m afraid some in the EU are now relying on legal defaults to argue that every good is “at risk” and therefore liable for tariffs.

That would mean Mr Speaker, tariffs that could get as high as 90 per cent by value on Scottish beef

Going to Northern Ireland moving not from Stranraer to Dublin

but from Stranraer to Belfast, within our United Kingdom.

And potentially over 100 per cent on clotted cream moving from Torridge – to pick a Devonshire town at random – to Larne.

Mr Speaker, this is unreasonable and clearly against the spirit of that Protocol

They are threatening to carve tariff borders across our own country,

divide our own land,

change the very economic geography of the UK

and egregiously ride roughshod over their own commitment under Article 4 of the Protocol, whereby and I quote –

“Northern Ireland is part of the customs territory of the United Kingdom.”

Mr Speaker, we cannot have a situation where the very boundaries of our country could be dictated by a foreign power or international organisation.

No British Prime Minister, no Government, no Parliament could ever accept such an imposition.

Last year we signed the Withdrawal Agreement in the belief the EU would be reasonable.

Now, after everything that has recently happened, we must consider the alternative.

We ask for reasonableness, and common sense, and for balance

and we still hope to achieve that Mr Speaker, through the Joint Committee process

in which we always persevere, no matter what the provocation.

What we are seeking to do, is to insure this country, to protect this country, against the EU’s proven willingness to use this delicately balanced Protocol in ways for which it was never intended.

by creating a legal safety net

whereby Ministers can act to guarantee the integrity of our United Kingdom.

I understand how some people will feel unease over the use of these powers.

and I have absolutely no desire to use these measures.

and if we reach agreement with our European friends

which I still believe is possible –

they will never be invoked.

And, of course, it is the case that the passing of this Bill does not constitute the exercise of these powers.

If they were ever needed, ministers would return to this House with a statutory instrument on which a vote would be held.

And we will simultaneously pursue every possible redress under international law, as provided for in the Protocol.

In addition to our steps in domestic law,

we would if we had to make clear that we believe the EU is engaged in a material breach of its duties of good faith, as required under the Withdrawal Agreement and the Vienna Convention on the law of treaties.

We will seek an arbitration, as provided for under the Withdrawal Agreement, and consider safeguards under Article 16 of the Protocol.

It is not a question of if we meet our obligations,

but how we fulfil them.

We must do so in a way that satisfies the fundamental purpose of the Protocol, the Belfast (Good Friday) Agreement and the constitutional position of Northern Ireland.

We will work with the EU on all of these issues

and even if we have to use these powers

we will continue to engage with the Joint Committee

so that any dispute is resolved as quickly and as amicably as possible,

reconciling the integrity of the EU single market with Northern Ireland’s place in the United Kingdom’s customs territory.

But what we cannot do now

is tolerate a situation where our EU counterparts seriously believe that they have the power to break up our country.

That illusion must be decently despatched,

and that is why these reserve powers are enshrined in this Bill.

In addition, Mr Speaker, this Bill will help deliver the single biggest transfer of powers to the devolved administrations since their creation,

through a new independent body, the Office of the Internal Market.

The Bill will maintain our common cause of high standards

where we already go beyond the EU in areas ranging from health and safety to consumer and environmental protections.

Mr Speaker, just a year ago this Parliament was deadlocked,

and, worst of all, undermining by our negotiators

by effectively telling the EU that if they played hardball,

this House would oblige them by weakening our country’s hand

and legally forbid our representatives from walking away from the negotiating table.

Mr Speaker, I hope this House will never make that mistake again

Instead, let us seize the opportunity presented by this Bill to send a message of unity and resolve.

Let’s say together to our European friends

but we will not get there if they seek to divide us.

With this Bill we will support jobs and growth across the UK.

We will back our negotiators in Brussels,

And above all, we will protect the territorial integrity of the UK and the peace process in Northern Ireland

So I urge this House to support this Bill and get back to the business of securing a free trade agreement with our closest neighbours that we all wish to see.

And Mr Speaker, I commend this Bill to the House.