#AceNewsReport – Sept.16: Lithuania’s decision to recognise Svetlana Tikhanovskaya as the leader of Belarus “violates the norms of international law,” according to a statement by the Council of the Republic, the upper house of parliament in Minsk:

Last week, the Lithuanian Seimas (parliament) adopted a resolution titled “On the Illegitimate Union Imposed by Russia on Belarus,” naming former presidential candidate Tikhanovskaya as the “elected leader” of the Belarusian people, and incumbent President Alexander Lukashenko as “illegitimate.” 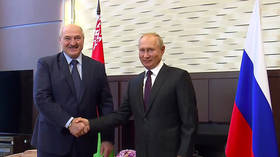 READ MORE: Kremlin says it considers Lukashenko to be legitimate president of Belarus, as Putin agrees a $1.5 billion loan for Minsk

“The decision of Lithuanian MPs to appoint a ‘leader of the people of Belarus’ is beyond the scope of common sense,” the Presidium of the Council of the Republic’s statement read. “Such actions are provocative and unacceptable, and violate the norms of international law.”

The statement also called Lithuania’s actions “blatant interference,”accusing the Seimas of “showing open disrespect for the sovereign right of the Belarusian people to choose their own leadership.”

Tikhanovskaya fled across Belarus’ northern border to Lithuania on August 11, two days after official election results suggested that she had come in a distant second place: Following the vote, thousands of Belarusians took to the streets throughout the country to protest over what they believe to have been a wholly rigged election: During days of demonstrations, police and internal troops used tear gas, stun grenades, and rubber bullets to disperse protesters, while strikes began at large factories:

Following her arrival in Lithuania, Tikhanovskaya formed a body called the Coordination Council, with the goal of organizing a peaceful transition of power away from President Lukashenko, and of holding new elections: The group, which includes Nobel Prize winner Svetlana Alexievich as part of its leadership, has been accused by the Belarusian authorities of “aiming to seize state power” and “harming national security.”