#AceNewsReport – Sept. 24: An international tribunal investigating war crimes committed during Kosovo’s 1998-99 independence war has arrested its first suspect, a former commander of separatist fighters: The Kosovo Specialist Chambers, based in The Hague, said the former Kosovo Liberation Army (KLA) commander Salih Mustafa was arrested based on a “warrant, transfer order and confirmed indictment issued by a pre-trial judge”. The court’s statement did not identify the charges on which he was indicted: 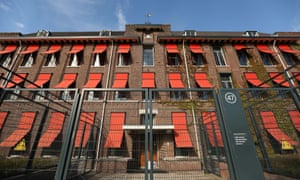 The Kosovo Specialist Chambers in The Hague, where Mustafa will be transferred to. Photograph: Eva Plevier/Reuters

The court said Mustafa would be transferred to its detention facilities in The Hague and “appear before the pre-trial judge without undue delay”. He is the first ethnic Albanian to be arrested by the tribunal on war crimes charges arising from the conflict: The KLA was made up of ethnic Albanian rebels who wanted Kosovo’s independence from Serbia. Mustafa oversaw fighters in the Llapi area, 20 miles (35km) north of the capital, Pristina: He later served as intelligence chief of the Kosovo Security Force, military troops created in 2009 as a transitional unit before becoming a regular army:

The Kosovo Specialist Chambers and a companion prosecutors’ office was established five years ago to look into allegations that KLA members committed war crimes and crimes against humanity: Its prosecutors also have indicted Kosovo’s president, Hashim Thaçi, the former parliamentary speaker Kadri Veseli, and others with crimes that include murder, enforced disappearances, persecution and torture. Both men have denied committing any crimes.

The 1998-99 war left more than 10,000 people dead, most of them ethnic Albanians from Kosovo. More than 1,600 people remain unaccounted for: The fighting ended after a 78-day Nato air campaign against Serbian troops: Kosovo, which is dominated by ethnic Albanians, declared independence from Serbia in 2008, a move recognised by many western nations but not Serbia or its allies Russia and China: