More than 1,000 arrested and over 1,500 vulnerable people safeguarded in ‘ County Lines Gangs ‘ crackdown 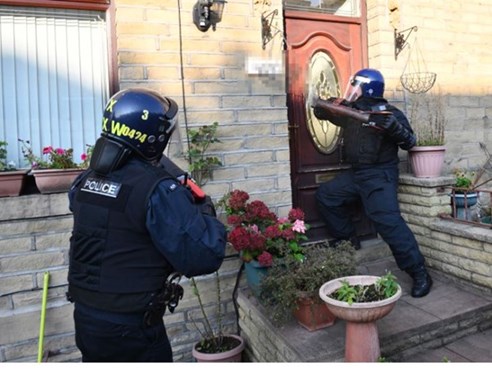 Between Monday 14 and 20 September, as a result of operations carried out by police forces and Regional Organised Crime Units (ROCUs):

More than a tonne of heroin and morphine derivatives were recovered from a container ship after it docked at the port of Felixstowe: The haul would be worth around £21 million to organised criminals at wholesale, and in excess of £120 million at street level. Heroin is typically supplied via County Lines dealing:

The week of intensification is just one part of the law enforcement response to tackling County Lines: In the last year alone, NCA activity in the UK and around the world to target organised crime groups has led to the seizure of 132 tonnes of cocaine and five tonnes of heroin.

Police forces and ROCUs continuously undertake activity to track down offenders, close down lines, and safeguard victims: More than 3,600 people have now been arrested for being involved in County Lines since November 2019:

Nikki Holland, NCA County Lines lead and Director of Investigations, said: “The violence, exploitation and utter misery caused by County Lines networks can be felt all the way from the top of the chain in the countries where the drugs are produced, right to the bottom on the streets of the UK: “The NCA targets the international organised criminal groups who smuggle the drugs into the country that are then filtered down to the children being forced to transport them across the UK: By focusing on those at the top of the chain and effectively cutting the head off the snake, we reduce drug supply to the UK, making it an unviable business for the criminals involved: “The joint approach with policing and our international partners allows us to mount our coordinated attack from all angles, and to disrupt firearms supply, money laundering, corruption, people trafficking, and other violent and exploitative crime that these groups are also involved in.”……………..Tackling violence in all its forms is an absolute priority for policing and significant effort has been invested in understanding how those involved in County Lines contribute to violent crime across the UK: This stark link between drugs and violence is further evident in the results achieved by forces and ROCUs throughout the intensification week:

Deputy Assistant Commissioner Graham McNulty, the NPCC lead for County Lines, said: “Through significant efforts across policing we are beginning to turn what may have previously been considered a low risk, high reward enterprise on its head. Forces are working more closely on the disruption of County Lines than ever before and have closed down a large number of the most violent lines in the UK: “ By targeting those at the centre of County Lines, we not only disrupt the criminal network, but we prevent other criminality including serious violence from occurring. We are putting a spotlight on those responsible for coordinating widespread drug supply, and making them vulnerable to capture………“County Lines causes misery for communities and it is absolutely right we continue targeting those responsible. The results from this week alone show policing’s unwavering commitment to protecting the public and bringing criminals to justice.”

Home Secretary Priti Patel said: “I will not tolerate County Lines drugs gangs terrorising our communities and exploiting young people, which is why I have made tackling this threat a priority: “I saw first-hand one of the operations last week and the results of this latest crackdown are hugely impressive. They send a clear message to criminals that law enforcement is coming after them: “I will continue to back the police in their fight to roll up these gangs, including through our £25 million investment in this crucial work.”

Anyone with concerns about County Lines can speak to local police on 101 or call 999 in an emergency: If you would rather stay anonymous you can call the independent charity Crimestoppers on 0800 555 111.