#AceNewsReport – Oct.04: The very idea of charging him with kidnapping for preventing migrants from entering Italy is absurd. The globalist Leftists who have put him on trial don’t care about Italy or the Italians: They don’t want Italy to defend itself against the mass Muslim migrant influx that has seen a spike in crime, including jihad terror activity, all over Europe. Salvini is the only one standing in the breach: If he goes, Italy goes:

#Salvini on trial for kidnapping charges that he says was due to him preventing immigrants entering the country ….and rise of crimes 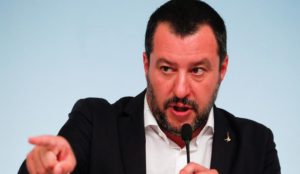 Italy’s far-right former interior minister Matteo Salvini goes on trial on Saturday on kidnapping charges over an incident in 2019 when 116 migrants were prevented from disembarking a coastguard ship in the Mediterranean.

Prosecutors in the Sicilian city of Catania accuse the League party leader of abusing his powers to block people from disembarking from the Gregoretti coastguard boat under his “closed ports” policy.

The 47-year-old called on his supporters to descend on the courtroom in Catania to protest against what he has described as a plot against him. “I will plead guilty to defending Italy and the Italians,” Salvini told the press last week….