#AceNewsReport – Oct.04: Heavy rain is continuing to fall, amid warnings that parts of the UK face the risk of flooding: The Met Office has issued amber warnings for parts of eastern Scotland, the West Midlands, south-west England and most of Wales: Police warned motorists to take care, while in Essex, firefighters rescued a family of four when their car became trapped in floodwater: Yellow, less severe, warnings for rain affect much of the rest of the country: 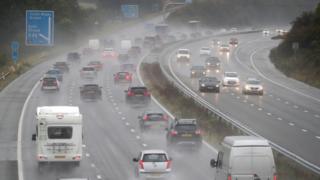 Rain is forecast to continue overnight, with warnings in force until 06:00 BST on Sunday: The last time amber warnings for rain were issued was in March, the Met Office said: The places worst hit so far on Saturday include parts of Exmoor, with 84mm of rain recorded in 36 hours in Liscombe and 74.4mm recorded in Brendon Hill.

ScotRail tweeted there would be reduced train services in amber warning areas, with “a controlled shut down of the network” around 19:00 BST:

A gust of 71mph (114km/h) was recorded at Berry Head on the Devon coast during the day:

The wind direction associated with the weekend’s rainfall is “unusual” and rainfall was likely to occur in some areas that are normally well sheltered and drier, the Met Office said: Drains could also become blocked with debris as trees are now in full leaf: In areas covered by amber weather warnings, the Met Office warned deep and fast-flowing floodwater may pose a “danger to life” in some areas and there was a “good chance” communities could be cut off.