#AceNewsReport – Oct.23: Legions of protesters faced off with mounted police in violent clashes in Melbourne amid rising tensions over the ongoing #coronavirus lockdown in the city, which has lasted over 100 days: Hundreds of protesters marched towards the city’s Arts Center on Friday, while shouting “freedom” and “choose your side” at police during the so-called “Freedom Day” rally which began about 2pm local time:

Agitators among the 200- to 300-strong crowd were filmed kicking police horses and striking them with flag poles. At one point, a protester called one of the horses a “racist.”

WATCH: A protestor whacks a horse in the head with his flag. Listen closely and you’ll hear someone abuse the horse for being racist. @9NewsMelb pic.twitter.com/UT36rB03ba

Protest all you want, there’s still no excuse for kicking horse… @9NewsMelb pic.twitter.com/7P44RX3pOi

Many of the protesters refused to wear masks and cried out “Free Victoria,” while some carried placards with messages like “Media is the virus,” “Covid-19 is a scam,” and “Wake up, Aussies.”

Police ‘kettled’ protesters at the Shrine of Remembrance, deploying pepper spray as they made several arrests as the situation deteriorated and became more violent. Arrested protesters could face double fines for Friday’s march: one for breach of coronavirus restrictions and one for contravening rules governing behaviour at the shrine.

Premier Daniel Andrews described the protest as “shameful” and “unlawful” while arguing that the strict lockdown has worked, citing a precipitous drop in new cases since it began.

Just a few months back we recorded 725 new daily cases.

Today, we have just one.

As a state, we’ve faced a year like no other. With the odds truly stacked against us.

Some were quick to lay the blame for the previous high case numbers on Andrews for his initial lackluster response, and called for an investigation into his handling of the pandemic.

And a few months before that, we had none. If you’d followed other States we would never have had 725. You are responsible for those deaths, and for the mental and financial disintegration of Australians who live in Victoria. Your inquiry is a sham. We need a Royal Commission.

Melbourne has been on lockdown for over 100 days now, with a 25km travel limit still in place: Lockdown rules were eased this week but certain restrictions remain in place; Melburnians are all owed to gather outdoors in groups of no more than 10 people between two households: 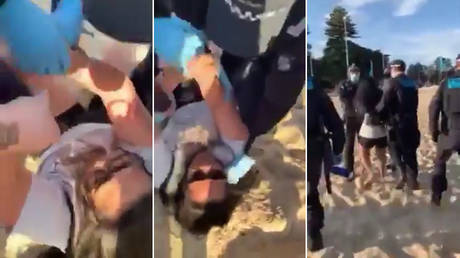