#AceNewsReport – Oct.28: Keith Raniere promised a path to happiness, seducing wealthy people who felt they lacked a higher purpose in life: His company, Nxivm, offered self-improvement workshops that became popular in Hollywood and business circles: But beneath the surface, Mr. Raniere was a puppet master controlling a cultlike criminal enterprise, prosecutors revealed at his trial. Some women in Nxivm were sexually abused by Mr. Raniere, and even branded with his initials in a secret ceremony

Keith Raniere, Leader of #Nxivm Sex Cult, Is Sentenced to 120 Years in Prison

In the courtroom, more than a dozen victims gave wrenching testimony about how he manipulated and sexually abused them. 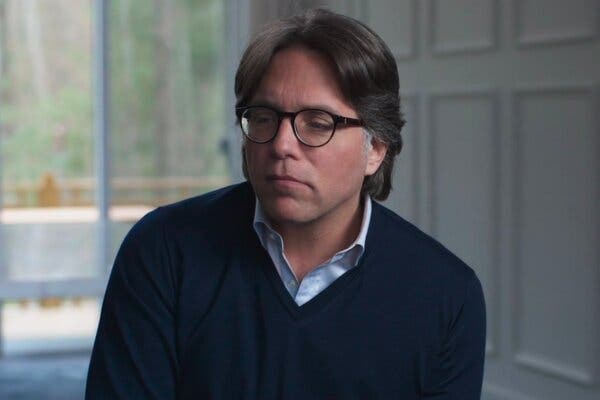 On Tuesday, Mr. Raniere, 60, was sentenced to 120 years in prison for sex trafficking and other crimes, effectively a life sentence. The judge also ordered him to pay a $1.75 million fine: The sentencing capped a remarkable downfall for a man who was once idolized by his followers, but has since been exposed as a fraudster who exploited Nxivm’s adherents for money, sex and power.

Judge Nicholas G. Garaufis of Federal District Court in Brooklyn determined the punishment after hearing hours of wrenching testimony from 15 victims, many of whom described how Mr. Raniere had left them traumatized and brainwashed from his pseudoscientific teachings: Mr. Raniere’s lawyer, Marc Agnifilo, said he would appeal the sentence. “I salute the people who came in and spoke,” he said.

The first to speak was a woman identified only as Camila, who in a trembling voice recalled that Mr. Raniere started sexually abusing her when she was 15 and he was 45. She had previously declined to cooperate with prosecutors on the advice of a lawyer who was recommended to her by Mr. Raniere’s counsel: During their 12-year relationship, Camila said, Mr. Raniere expected her to be available for sex at all hours. He ordered her to weigh less than 100 pounds and directed her to get an abortion. She said she attempted suicide once: “I want to move on, but he has damaged me in so many ways,” Camila said: When he wanted to replace Camila, prosecutors have said, he directed his inner circle to find another “young virgin successor” for him: Camila’s mother, brother and a sister also spoke on Tuesday, telling the judge that Mr. Raniere destroyed their once close-knit family. The father and oldest daughter in the family — who had a child with Mr. Raniere — are still supporters of him. Mr. Raniere had a sexual relationship with all three sisters in the family:

In a speech before the court, Mr. Raniere, wearing blue prisoner clothes, maintained his innocence and said some of the victims were lying. He said he was “deeply sorry,” arguing that he did not mean to cause so much pain and anger: “Where I am is caused by me,” Mr. Raniere said. “This is all my doing.”……As Mr. Raniere waffled between apologizing and blaming the women, one of his victims and ex-girlfriends, Toni Natalie, buried her head in her hands: After the victims’ statements, Mr. Raniere’s lawyer, Mr. Agnifilo, argued that his client never intended to hurt any women, saying he was in love with them and simply had trouble dealing with breakups. In a stunning moment, Judge Garaufis interrupted Mr. Agnifilo in the middle of his speech, yelling, “No!”

During a back-and-forth in which the two men shouted through face masks, Judge Garaufis spoke forcefully about how intent did not matter when a 45-year-old man sexually abuses a child: “It’s an insult to the intelligence of anyone who listens,” the judge said.

Mr. Agnifilo did seem to acknowledge tensions with his client, saying that he had refused to file a motion claiming evidence tampering by the government even though Mr. Raniere asked him to. In recent months, Mr. Raniere has spearheaded a campaign to overturn his conviction, directing his supporters to create a podcast about his case and set up a contest to find errors in his prosecution in exchange for a $25,000 cash prize:

Another victim, India Oxenberg, told the court that Mr. Raniere tried to poison her relationship with her mother, the actress Catherine Oxenberg, whose efforts to extricate her daughter from the organization were part of a recent HBO documentary series about Nxivm called “The Vow.” ………..India Oxenberg said Mr. Raniere expected her to wait naked for him, like a piece of meat. She became so thin under his manipulation that she stopped getting her period, she said: “You are a sexual predator, and you raped me,” India Oxenberg said. “When you touched me, I recoiled.”

Former Nxivm (pronounced NEX-ee-um) members said Mr. Raniere preyed on insecure people who hoped that immersing themselves in expensive self-help classes would unlock the key to fulfillment. Even highly educated people became trapped inside Mr. Raniere’s system, which he sold as the only way to overcome their fears, shaming anyone who tried to quit:

At Mr. Raniere’s trial, a primary focus was a secretive women-only group inside Nxivm: During a videotaped initiation ceremony, the women lay naked on a table, saying, “Master, please brand me,” as a cauterizing pen seared their skin without anesthesia: Some of those women testified that they thought they were joining a women’s mentorship group, only to discover that they were directed to have sex with Mr. Raniere: The women, referred to as “slaves,” were regularly required to hand over collateral like sexually explicit videos, which they constantly feared would be released. Prosecutors called it extortion.

On Tuesday, a former “slave” identified only as Nicole told the judge that the collateral was the only thing stopping her from spitting in Mr. Raniere’s face during her time in the group, which she described as the most degrading experience of her life: “I had never agreed to give up the right to my body,” she said.

A jury convicted Mr. Raniere in June 2019 after a six-week trial: Besides sex trafficking, the jury found him guilty of crimes that included racketeering and child pornography: To this day, Mr. Raniere has many supporters who insist that every activity in Nxivm was among consenting adults. Dozens wrote letters to the courturging leniency.

His supporters flocked to Brooklyn on Tuesday, waiting hours in line to enter the courthouse: There was a tense atmosphere before the sentencing; Mr. Raniere’s loyalists would approach victims or other lawyers involved in the case, who tried to dodge them: Nxivm was funded in large part by an heiress to the Seagram’s liquor fortune, Clare Bronfman, who spent more than $100 million of her inheritance to sue Mr. Raniere’s enemies and support the organization: One of Nxivm’s top recruiters was Allison Mack, the former television actress known for her role on “Smallville,” whose glowing testimonials helped bring Hollywood celebrities into the organization. The Dalai Lama once spoke at a Nxivm event.

Mr. Raniere was charged along with five women in his inner circle, including Ms. Bronfman and Ms. Mack. Each of them pleaded guilty ahead of his trial: Ms. Bronfman was sentenced last month to more than six years in prison for her role in Nxivm. The others do not have sentencing dates yet:

Mr. Raniere never married and had long-term relationships simultaneously with multiple women. Nxivm’s curriculum taught that women were to be monogamous, while men were to be polygamous: He fathered children with two women, including Kristin Keeffe, who spoke at his sentencing and said he had never paid child support for their teenage son.

Ms. Keeffe said that even though she was hired as an employee in Nxivm’s legal affairs department, Mr. Raniere commanded sexual obedience from her: She and other victims said Nxivm’s leaders told them not to seek professional medical help because Mr. Raniere knew better than doctors:

Since Mr. Raniere created Nxivm in 1998, around 18,000 people have taken its courses in the United States, Mexico and Canada: The group’s sales pitch claimed that Mr. Raniere was a genius with one of the highest I.Q. scores in the world. In reality, prosecutors have said, he graduated with a 2.26 grade point average from Rensselaer Polytechnic Institute in Troy, N.Y…………Most Nxivm members never had a sexual relationship with Mr. Raniere, but they did face pressure to pay for more and more classes, sometimes taking on debt to do so. One couple estimated they spent $300,000 on Nxivm courses and were forced to declare bankruptcy, prosecutors have said……………Nxivm defectors said it was not as easy as it seemed to leave the group……….Many participants took some workshops and moved on………..But others had quit their careers and moved to the company’s headquarters near Albany, N.Y., where they were isolated and more susceptible to Mr. Raniere’s influence……………..The ones who became Nxivm coaches depended on the organization for income……………Some were Mexican immigrants who needed Nxivm for their legal status in the United States…………And they had seen what happened to critics of Nxivm, who were targeted by private investigators and hit with endless lawsuits. Ms. Bronfman had even convinced the authorities to initiate criminal investigations against some of them.

When the authorities finally arrested Mr. Raniere in 2018, he was at a luxury villa near Puerto Vallarta, Mexico, hiding in a closet. He was living with several women from Nxivm: As he was placed in the back of a police car and zipped away, the women chased after him: