#AceNewsReport – Oct.28: Suggestions that Bellingcat is a tool of Western governments, and funded by them directly, have long-abounded – and consistently been denied by founder and chief Eliot Higgins: 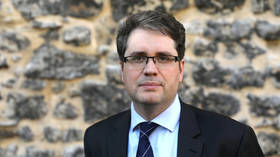 By Kit Klarenberg, an investigative journalist exploring the role of intelligence services in shaping politics and perceptions:

Several documents openly referred to Bellingcat, at least one suggesting the organizations were collaborating on certain projects – if true, this would in turn imply Bellingcat was in receipt of FCO cash: Higgins was repeatedly probed on the question via Twitter, but he strenuously deniedBellingcat had conducted any work for or with the Initiative, or received FCO funding:

However, publicly-available documents prove the latter contention, at least, to be an outright lie: As Declassified UK chief Matt Kennard revealed on Twitter on October 26, official FCO procurement figuresmake clear the department paid Bellingcat £1,800 on December 20 2018 for “consulting, management and public relations” services – mere days prior to several of Higgins’ spirited denials: The precise nature of the “consulting, management and public relations” services rendered by the organization is unclear, although it may be related to shadowy FCO program Open Information Partnership (OIP)…………………Officially, under its auspices Bellingcat collaborates with the Atlantic Council’s DFRLab, Zinc Network and Media Diversity Institute to “work together through peer-to-peer learning, training and working groups to pioneer methods to expose disinformation,” in collaboration with a sizable network of NGOs across Europe: However, leaked documents suggest the endeavor is in actuality an avowed “disinformation factory” itself, seeking to covertly further Whitehall’s global policy objectives, seeking to influence “elections taking place in countries of particular interest to the FCO,” and other malign objectives – and strongly suggest Integrity Initiative is involved in the endeavour, or at least was at some stage.

The Initiative’s parent ‘charity’ Institute for Statecraft was named as one of OIP’s partners alongside Bellingcat et al, a number of Initiative staff were to be seconded to OIP, and the Initiative’s “pre-existing pool of contacts” was intended to serve “as a springboard for the identification of new potential network members.” Significantly, the documents also detail numerous examples of OIP partners collaborating prior to the program’s April 2019 launch – yet further indications Eliot Higgins was also lying when he denied Bellingcat had ever joined forces with the Integrity Initiative:

For instance, in Ukraine OIP collaborated with a dozen online ‘influencers’ “to counter Kremlin-backed messaging through innovative editorial strategies, audience segmentation, and production models that reflected the complex and sensitive political environment,” in the process allowing them to “reach wider audiences with compelling content that received over four million views.”

In Russia and Central Asia, OIP worked with a network of ‘YouTubers’ in Russia and Central Asia to create videos “promoting media integrity and democratic values.” Somewhat sinisterly, participants were also taught how to “make and receive international payments without being registered as external sources of funding” and “develop editorial strategies to deliver key messages,” while the organization minimized their “risk of prosecution” and managed “project communications” to ensure the existence of the network, and indeed OIP’s role, were kept “confidential.”

Bellingcat’s website notes the organization is an OIP partner, although the fact that the program is funded entirely by the FCO – a fact openly stated on OIP’s homepage – isn’t mentioned. Upon the endeavour’s launch, Higgins was keen to claim Bellingcat was “subcontracted” for the project by OIP partner Zinc Network, which in turn received FCO funds: A cynic might suggest this semantic fudge allowed him to maintain the fiction Bellingcat wasn’t funded directly by the FCO, thus preserving the myth the organization is an independent citizen journalist collective, while nonetheless being heavily bankrolled by the UK government:

Alternatively, it may be the case that Whitehall itself wishes to distance itself from Higgins: After all, a leaked FCO-commissioned appraisal of Bellingcat concluded the organization was “somewhat discredited, both by spreading disinformation itself, and by being willing to produce reports for anyone willing to pay.”

Whatever the truth of the matter, there are indications Bellingcat’s relationship with the FCO may extend far further than what can be pieced together from publicly-available information: A Freedom of Information request submitted to the FCO in January 2019 asked the department for all internal documents related to research on the Syrian crisis mentioning Bellingcat, particularly those relating to the use of chemical weapons in the country, and “any documents that refer to the reliability of Bellingcat as a source when drafting research assessments.”

In response, the FCO stated it could “neither confirm nor deny it holds information relevant to your request,” on the grounds of “safeguarding national security.”