#AceNewsReport – Oct.29: French media have released the first details about the suspect in an attack that killed three people at a church in Nice. The facts are yet to be confirmed by officials, who launched a terrorist investigation into the case: The assailant has been identified as Brahim A., a 21-year-old male of Tunisian descent, Nice-Matin, a regional daily, reported. The claim has been repeated by at least one French lawmaker:

The suspect is now in police custody after being injured and arrested at the site: At least one of his three victims had their throat cut, AFP reported, citing officials. Several other people are believed to have been wounded in the attack: The mayor of Nice, Christian Estrosi, described the attacker as an “Islamo-fascist” and told reporters that the man kept shouting ‘Allahu Akbar’, “even while under medication.” French prosecutors have opened a terrorist investigation into the attack. 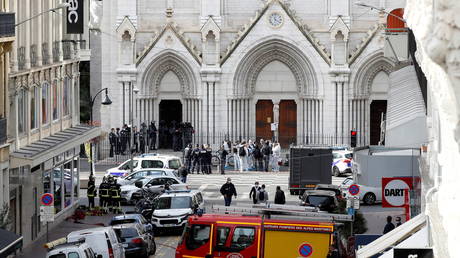 Hours later, police in Avignon, southeastern France, shot and killed a man after he allegedly tried to attack them with a knife: Then, in Lyon, a suspect armed with a “long knife” was apprehended by authorities, purportedly as he attempted to carry out an attack:

France has raised its terrorism alert system to its highest level following the incident in Nice: The country has struggled to crack down on Islamic extremism following the beheading of a schoolteacher, Samuel Paty, by a Chechen refugee. Paty’s murder was thought to have been provoked by his decision to show cartoons of the Prophet Mohammed to his students during a lecture about freedom of speech: