#AceNewsReport – Oct.30: The counter-terrorism division of Tunisia’s public prosecutor’s office has ordered a probe into whether the alleged terrorist cell, “Al Mahdi in southern Tunisia,” is real, and if so whether it played any role in Thursday’s attack in Nice: The Tunisian press agency TAP said that the investigation was prompted by a social media post in which an individual who claimed to be part of the group took responsibility for the knife rampage that killed three people: 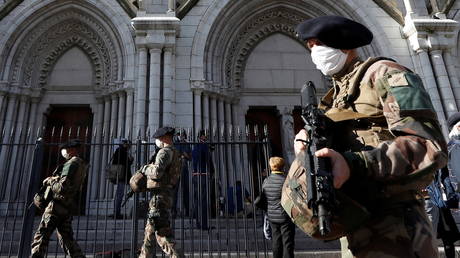 The suspect in the incident is a Tunisian migrant who recently arrived in France from Italy. The 21-year-old, identified as Brahim Aouissaoui, was shot and seriously wounded by police after allegedly carrying out the attack at the city’s Notre Dame church. Police claim that they found several blades, two phones and a copy of the Koran at the crime scene: The French government has described the attack as an act of Islamic terrorism: His family in Tunisia, however, insists that Aouissaoui showed no signs of extremism. In an interview with Reuters, his sister said that he had come to the church on Thursday morning soon after arriving in Nice and was planning on sleeping nearby. In a video call with his family, Aouissaoui reportedly said that he planned to sleep in a building opposite the church: The entire family is now under investigation, and their phones have been confiscated by Tunisian security officials, Aouissaoui said.

On Friday, French police detained a 47-year-old man who was reportedly in contact with the suspect a day before the attack: The French government has vowed to crack down on Islamic extremism and has said the country should brace for further attacks on its soil: