#AceNewsReport – Nov.02: The #Taliban said they were not involved in today’s incident at Kabul University, but several education centres have been attacked over the years by extremist groups such as Islamic State (IS): Kabul police spokesman Ferdaws Faramerz told AFP most of those killed were students: Hamid Obaidi, a spokesman for the ministry of higher education, told AFP the attack started when government officials were arriving for the opening of an Iranian book fair organised at the campus: Gunmen stormed the facility, sending hundreds fleeing and scrambling over walls of the campus as they tried to escape the firing, witnesses said: Afghan security forces later surrounded the area, cordoning off all roads that led to the university, witnesses and an AFP correspondent reported: “The attack is over, but sadly 19 people have been killed and 22 more wounded,” interior spokesman Arian said on Twitter: 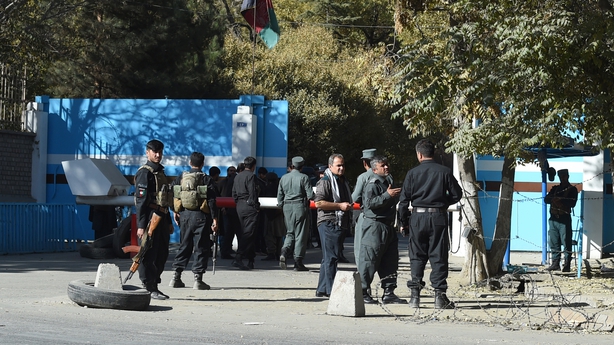 Sources told TOLOnews that there were three attackers. According to the report, an explosion and gunfire occurred when Afghan and Iranian officials were opening a book exhibition.

The outlet posted photos of students being evacuated from the campus.

Students spoke of chaos and confusion. “We were studying inside our classrooms when suddenly we heard a burst of gunfire inside the university,” said Fraidoon Ahmadi, 23, adding that he and several other students were besieged for more than two hours before being rescued: “We were very scared and we thought it could be the last day of our lives… boys and girls were shouting, praying and crying for help.”

About 800 students were in the social sciences faculty where he was studying: “I have no words to express how we survived today’s attack by gunmen on our university,” he added: