#AceHealthReport – Nov.03: Londoners worrying about air quality can now breathe a little easier, thanks to news from the city’s mayor: There have been “dramatic improvements in London’s air quality across the capital since 2016,” the office of London Mayor Sadiq Khan says:Those improvements include a 94% reduction in the number of people living in areas that exceed the legal limit for nitrogen dioxide (NO2) levels. There has also been a marked improvement in the air quality surrounding schools, the Air Quality in London 2016-2020 report says…

While some of the more recent improvements in air quality might be due to reduced emissions levels during the pandemic, the report states there had already been a 35% fall in central London’s NO2 levels between 2017 and the pre-lockdown part of early 2020. Much of the achievement has been attributed to the city’s ultra-low emission zone (ULEZ), which came into force in April 2019.

The London ULEZ was the first of its kind and has some of the world’s toughest standards. Older vehicles and those with high emissions are subject to a daily charge of around $16. That’s in addition to a charge of around $20 to drive in central London’s Congestion Charge zone.

The ULEZ is being gradually widened to cover a greater area of London in late 2021. Similar schemes are now commonplace across much of Europe.

It isn’t all good news for London, though. Many thousands of its residents are affected by air pollution levels that exceed World Health Organization (WHO) guidelines. The problem particularly impacts inner-city parts of London, and the Mayor’s office warns that “deprived Londoners and [those] from Black, Asian and Minority Ethnic communities” are likely to be “exposed to the worst air pollution”

Not the worst – or the best

When compared with the rest of Europe, London’s air quality is among neither the worst nor the best. According to a study conducted by Greenmatch, the three most polluting countries are Turkey, Poland and Latvia. The three with the cleanest air are Sweden, Finland and France.

Across Europe, more than 500,000 early deaths per year have been blamed on poor air quality. The European Environment Agency looked at data from 40 countries across the continent and calculated the effects on mortality of ozone, PM2.5 fine particulate matter and NO2.

Meanwhile, the UK’s fuel-derived CO2 emissions are slightly better than the European average, according to an analysis of data from WHO, International Energy Agency and Data Worldbank, carried out by the energy service Greenmatch. 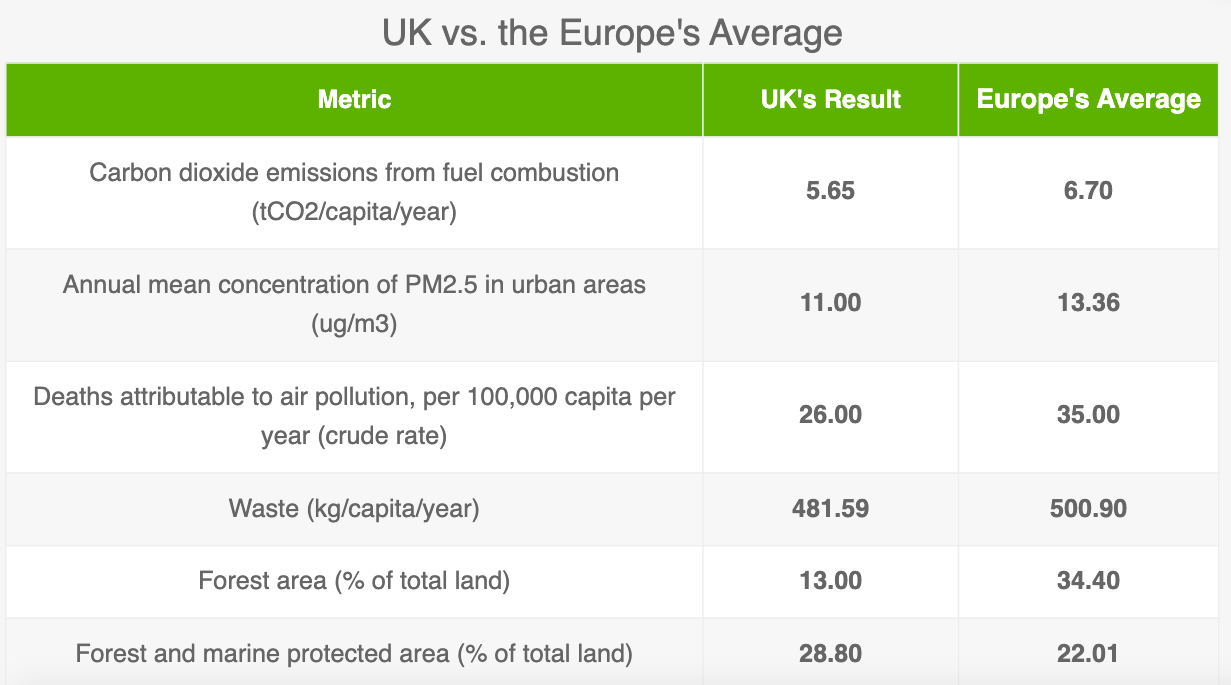 Denmark discards the most waste per year.

In France last year, a court ruled that the state had taken “insufficient measures concerning the quality of air” in Paris between 2012 and 2016, the BBC reports. The case in question was brought by a woman and her daughter who claimed polluted Parisian air had harmed their health.

Worldwide, as many as 600,000 children are thought to have died in a single year because of poor air quality. “Polluted air is poisoning millions of children and ruining their lives. This is inexcusable. Every child should be able to breathe clean air so they can grow and fulfil their full potential,” Dr Tedros Adhanom Ghebreyesus, WHO Director-General, wrote in a report in 2018. Analyzing data from 2016, the report also concluded that around 93% of children younger than 15 routinely breathe “air that is so polluted it puts their health and development at serious risk”.