#AceNewsReport – Nov.03: At least one “Islamist terrorist” was responsible for attacks across central Vienna, in which at least five people were killed and several others injured, Austrian Interior Minister Karl Nehammer said on Tuesday: A massive search operation has been launched for other attackers, with at least 1,000 police officers fanning out across the city, a police spokesman said: In an early morning televised news conference, Nehammer repeated calls for the public to stay off the streets:

Two Turkish MMA fighters living in Vienna have been saluted for courage and heroism after coming to the aid of a woman and a police officer amid deadly gun battles around the city, labeled a terrorist attack by authorities.

The duo, named in press reports as Mikail Ozen and Recep Gultekin, briefly appeared in viral video footage captured during the shootout on Monday night, in which Ozen is heard shouting “Take cover!” in Turkish as the two sought refuge behind a structure – what appears to be a subway entrance – with a volley of gunfire going off around them.

We just spoke to Mikail Ozen, whose voice can be heard in Turkish in this video and who has helped an injured police officer.

He says one of his friends has been injured too, while he and another friend are in healthy condition. https://t.co/VO5MC1JsVL

In addition to the harrowing encounter caught on video – in which Gultekin sustained a small wound to his leg – the two men also reportedly came to the rescue of both a woman and an injured police officer in the area.

“An old woman was heading towards the scene, walking on foot. When we saw the woman, we stopped and went downstairs. We also took that woman to a safe place,” Ozen told Hurriyet, a Turkish news outlet, adding “Then we came to the subway station [seen] in those images. I saw the police shot there.” 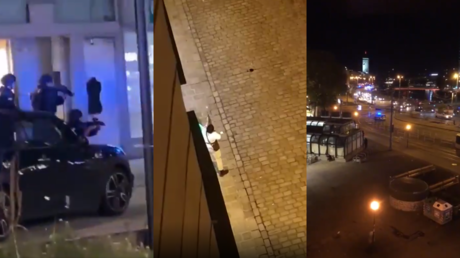 At one point during the incident, the gunmen were only about five to six meters away, said Ozen, who hails from Turkish city of Sarikaya but is now a citizen of Austria. He said that the pair went to the police station “immediately” afterwards, adding “We told the cops… about the terrorists. They were wearing something like a white shroud. He had a long-barreled gun.”

Though there was speculation earlier in the night that at least one of the gunmen was heard speaking Turkish during the shootout, that may stem from confusion over the video featuring Ozen. Other footage appears to show one of the assailants speaking Arabic.

Dear followers,some are spreading fake news that one of the attackers in Vienna was speaking Turkish.The man in the video that is seen screaming in Turkish is a boxer and that man tried to help the police officers that got shot but sadly he got shot/wounded also by the terrorist. pic.twitter.com/iPU7lXGI5O

Netizens have celebrated the two men – both believed to be mixed martial artists – for rushing into danger to assist others, with some dubbing them the “heroes of Vienna.”

“These are the heroes of [Vienna]: Recep Tayyip Gultekin and Mikail Ozen. You risked your life and saved the life of a woman and an injured police officer,” another wrote.

Nehammer said police had shot dead one attacker, a man wearing an explosives belt that turned out to be fake, whom authorities have identified as an Islamic State sympathiser: “We experienced an attack yesterday evening by at least one Islamist terrorist, a situation that we have not had to live through in Austria for decades,” Nehammer said: “Austria for more than 75 years has been a strong democracy, a mature democracy, a country whose identity is marked by values and basic rights, with freedom of expression, rule of law, but also tolerance in human coexistence,” he said. “Yesterday’s attack is an attack on just these values.”

The assailant killed by police, and other potential gunmen, attacked six locations in central Vienna on Monday evening, starting outside the main synagogue: Witnesses described the men firing into crowds in bars with automatic rifles, as many people took advantage of the last evening before a nationwide curfew was introduced because of COVID-19:

Police confirmed on Tuesday that three civilians – two men and a woman – were killed in the attacks with at least 15 others wounded, including a police officer. Broadcaster ORF later said a fourth civilian, a woman, had died: Nehammer said video material had been seized from the home of the known assailant during a search and police were investigating his potential connections.

News agency APA reported that multiple homes had been searched and arrests made, citing the Interior Ministry: An Interior Ministry spokesman was not immediately available for comment on the APA report: Vienna’s police chief declined to provide further details on the attacker’s identity, citing potential endangerment of the investigation.

Police sealed off much of the historic centre of the city overnight, urging the public to shelter in place. Many sought refuge in bars and hotels, while public transport throughout the old town was shut down and police scoured the city: Oskar Deutsch, the head of Vienna’s Jewish community, which has offices adjoining the synagogue on a narrow cobbled street dotted with bars, said on Twitter here that it was not clear whether the temple or offices were targeted but that they were closed at the time: Videos circulated on social media of a gunman running down a cobblestone street shooting and shouting. One showed a man gunning down a person outside what appeared to be a bar on the street housing the synagogue.