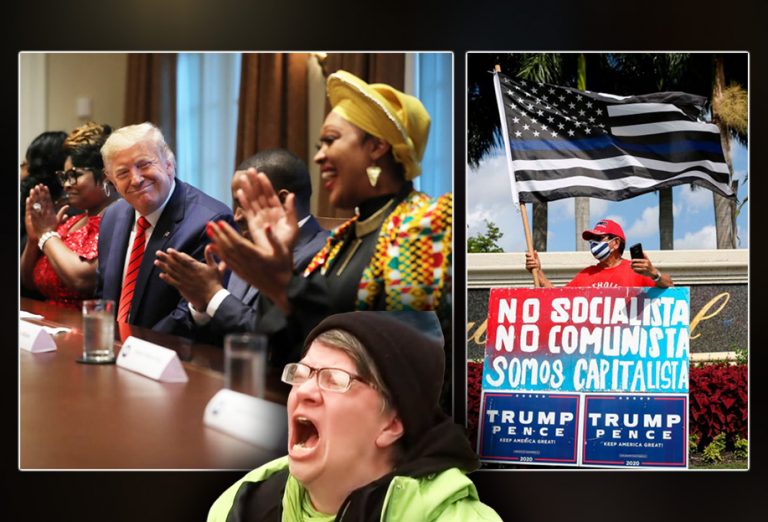 Champions of racial diversity were thrilled to see President Donald J. Trump significantly increase his support among minority voters. Libs, on the other hand, threw a massive tantrum.

Trump, as of Wednesday, was on track to receive a larger share of the non-white vote than any Republican presidential candidate since 1960. He increased his support among black, Latino, and Asian voters. He even doubled his support among LGBTQ voters.

The libs have responded to this triumph of diversity exactly as you might expect. Having spent the last four years insisting that Trump was enacting a brutal regime of “white supremacy,” their brains exploded. Latinos who vote for Trump were immediately reclassified as “white.” Easier to denounce them as racist that way.

People are consistently surprised by how Latinos trail only white voters in their support for Trump, but this is simply an unsophisticated understanding of the Latino as a category created by white po. Do white Cubans as a group identify naturally identify w Mexicans in camps?

Some elected Democrats, including Rep. Ruben Gallego (D., Ariz.), offered suggestions for how the party might improve its standing with Latino voters. His first suggestion: Stop using the word “Latinx,” woke jargon that appeals to educated white liberals and other party elites but most Latino voters have never heard.

MSNBC’s Joy Reid, who was promoted despite lying about hackers infiltrating her old blog to plant homophobic, Islamophobic, and anti-Semitic commentary under her byline, proved Gallego’s point by expressing surprise that “Latinx” was not “the preferred term.”

.@RubenGallego can you elaborate on this a bit more? I was under the impression that this was the preferred term, and as a Black person, I’m definitely sensitive to what people prefer to be called. I do know there is a “Spain- vs not Spain” connotation re “Hispanic…”

Trump’s surge of support among LGBTQ voters, meanwhile, was described as “frightening.” Some attributed it to the malevolence of “white gays” who couldn’t be trusted.

This increase in LGBTQ+ support for Trump is frightening to see. https://t.co/2yveKiVVCW

Also, the percentage of LGBT voting for Trump doubled from 2016. DOUBLED!!! This is why LGBT people of color don’t really trust the white gays. Yes, I said what I said. Period. pic.twitter.com/4SS4c4z76f

Democrats could ask themselves why minority voters are drifting away from the party and try to modify their behavior to strengthen their appeal among those voters, or they could keep screaming about white supremacy. Their initial response suggests a preference for the latter option.

While we can analyze the uptick of support in certain ethnic groups, the story of this election is that the majority of white people chose to protect and enable white supremacy over what was best for the country. They chose racism, and cruelty. https://t.co/91934Ed7VU

If you’re focusing on and questioning why minorities who make up small outlier percentages in Miami or parts of Texas voted for Trump but ignoring the tens of millions of white people nationwide who voted for Trump, you might be missing an underlying and serious issue at play.

What if they’re performing racist acts like supporting Trump? Then what do I do, white person? https://t.co/9D6Y8sWXeZ

It is amazing. That all he has to do is ask them to choose whiteness and they will run to it every single time — even in a plague. And then those goofy people who will never, ever be treated like a white man still tag along no matter how he much he professes his disdain. Amazing.