#AceNewsReport – Nov.10: Violent clashes broke out between protesters and police in Lima, Peru on Tuesday, after the country’s national congress voted on Monday to oust President Martin Vizcarra on grounds of “moral incapacity.”

Footage posted on social media from the protests appeared to show officers in riot gear striking people with batons, amid loud bangs:

At least four people were arrested in the capital, and demonstrators could also be seen hurling stones and charging, as police used tear gas to control the crowds.

Crowds also gathered outside Congress in central Lima, where politician Manuel Merino was being sworn in as the country’s interim president. Merino is Peru’s third president in four years, and he takes over from Vizcarra until July 2021, with elections scheduled for April. 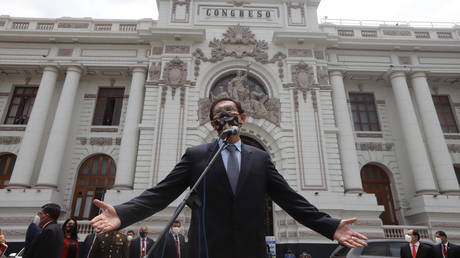 Some of those demonstrating carried signs reading, “Merino is not my president” – a reference to what many members of the public view as a kind of parliamentary coup: Peruvians also banged pots and pans on their balconies, with demonstrations taking place across the country on Tuesday, including in the cities of Serco, Arequipa, Lambayeque, and Cusco.

Vizcarra, who said he is co-operating with prosecutors, has questioned the “legality” and “legitimacy” of the decision to remove him from office: ” The legality is in question because the Constitutional Court did not speak out,” he said. “And the legitimacy, who gives it? Legitimacy is given by the people.”………………..Legislators backed Vizcarra’s removal based on corruption allegations, with a vote of 105 to 19 in favor of his ousting: