#AceNewsReport – Nov.14: Things got heated when Covid-19 skeptic march in the German city of Frankfurt was met with a counter-protest. The police had to interfere, using a water cannon to separate the sides and making arrests: The rally in the largest city in Germany’s central state of Hesse was staged by a group called “Lateral Thinking.” The group insists that the coronavirus is nothing but a hoax, and decries the government’s lockdown measures, introduced to stem the spread of the virus:

Around 2,000 people registered for the Saturday march, which was permitted by the local authorities, but at the start of the event the attendance was at around 500, according to the media.

The rally was allowed on the condition that the participants would be wearing face masks and following social distancing rules. The police reminded the crowd of those terms through loudspeakers, but many demonstrators still ignored them.

At least two counter-protests were also held in the city on Saturday. At some point, the route of the anti-lockdown march was blocked by a group of Antifa demonstrators.

They refused to disperse, prompting the police to use a water cannon to clear the way for the coronavirus skeptics and to avoid altercations between the sides.

There were also clashes between the police and Antifa, with footage from RT’s Ruptly video agency showing officers in full riot gear chasing after the demonstrators. One of the protesters is seen being harshly pushed to the ground by an officer, hitting his head on the pavement. The police were also filmed making several arrests. 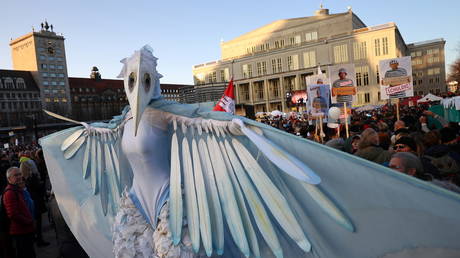 Protestors wear No face masks or apply social distancing as thousands protest Covid-19 lockdown in Germany’s Leipzig (VIDEOS) as the country has so far seen over 785,000 confirmed cases of Covid-19 and more than 12,400 deaths: In order to curb the second wave of the virus, the country went into a new partial lockdown in early November. Restaurants, bars, theaters, cinemas and gyms have been closed for a month, with private gatherings limited to 10 people from no more than two households:

Last week, a “Lateral Thinking” rally in Leipzig saw some 19,000 taking part. The event ended up being hijacked by right-wing groups and was marred by clashes with police and a number of arrests: