#AceNewsReport – Nov.16: The Falcon rocket thundered into the night from Kennedy Space Center with three Americans and one Japanese, the second crew to be launched by SpaceX. The Dragon capsule on top — named Resilience by its crew in light of this year’s many challenges, most notably COVID-19 — reached orbit nine minutes later. It is due to reach the space station late Monday and remain there until spring: “By working together through these difficult times, you’ve inspired the nation, the world, and in no small part the name of this incredible vehicle, Resilience,” Commander Mike Hopkins said right before liftoff: 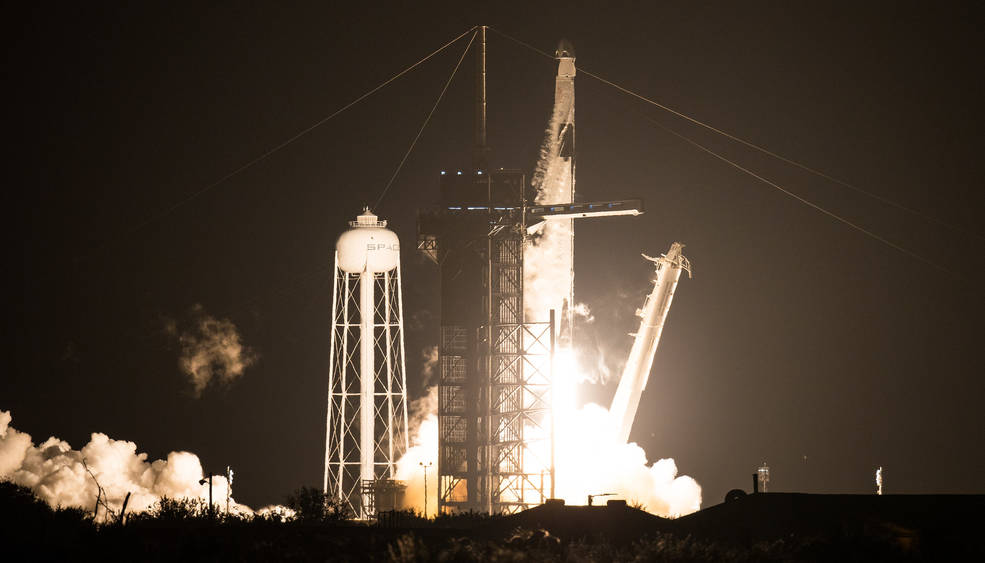 An international crew of astronauts is en route to the International Space Station following a successful launch on the first NASA-certified commercial human spacecraft system in history. NASA’s SpaceX Crew-1 mission lifted off at 7:27 p.m. EST Sunday from Launch Complex 39A at the agency’s Kennedy Space Center in Florida.

The SpaceX Falcon 9 rocket propelled the Crew Dragon spacecraft with NASA astronauts Michael Hopkins, Victor Glover, and Shannon Walker, along with Soichi Noguchi of the Japan Aerospace Exploration Agency (JAXA), into orbit to begin a six-month science mission aboard the space station.

“NASA is delivering on its commitment to the American people and our international partners to provide safe, reliable, and cost-effective missions to the International Space Station using American private industry,” said NASA Administrator Jim Bridenstine. “This is an important mission for NASA, SpaceX and our partners at JAXA, and we look forward to watching this crew arrive at station to carry on our partnership for all of humanity.”

The Crew Dragon spacecraft, named Resilience, will dock autonomously to the forward port of the station’s Harmony module about 11 p.m. Monday, Nov. 16. NASA Television and the agency’s website are providing ongoing live coverage through docking, hatch opening, and the ceremony to welcome the crew aboard the orbiting laboratory.

“I could not be more proud of the work we’ve done here today,” said Gwynne Shotwell, president and chief operating officer of SpaceX. “Falcon 9 looked great, Dragon was dropped off into a beautiful orbit about 12 minutes into the mission, and we’ll get more data as we go.”

The Crew-1 mission is the first of six crewed missions NASA and SpaceX will fly as part of the agency’s Commercial Crew Program. This mission has several firsts, including:

The astronauts named the Crew Dragon spacecraft Resilience, highlighting the dedication teams involved with the mission have displayed and to demonstrate that when we work together, there is no limit to what we can achieve. They named it in honor of their families, colleagues, and fellow citizens.

“Watching this mission launch is a special moment for NASA and our SpaceX team,” said Steve Stich, manager of NASA’s Commercial Crew Program. “We are looking forward to getting this crew to station to continue our important work, and I want to thank the teams for the amazing effort to make the next generation of human space transportation possible.”

During flight, SpaceX commands the spacecraft from its mission control center in Hawthorne, California, and NASA teams monitor space station operations throughout the flight from the Mission Control Center at the agency’s Johnson Space Center in Houston.

“It is an honor to have our Japanese astronaut launch on this Crew-1 Dragon as the first astronaut of the International Partner participating in the ISS program,” said Hiroshi Sasaki, JAXA vice president. “We look forward to having him conduct lots of science and demonstrate the technology, for here on Earth and for the future. I would also like to thank NASA and SpaceX for their tremendous effort to make this happen.”

Rubins, Hopkins, Glover, Walker, and Noguchi will participate in a live crew news conference from orbit at 9:55 a.m. Thursday, Nov. 19, on NASA TV and the agency’s website.

Michael Hopkins is commander of the Crew Dragon spacecraft and the Crew-1 mission. Hopkins is responsible for all phases of flight, from launch to re-entry. He also will serve as an Expedition 64 flight engineer aboard the station. Selected as a NASA astronaut in 2009, Hopkins spent 166 days in space as a long-duration crew member of Expeditions 37 and 38 and completed two spacewalks totaling 12 hours and 58 minutes. Born in Lebanon, Missouri, Hopkins grew up on a farm outside Richland, Missouri. He has a bachelor’s degree in aerospace engineering from the University of Illinois, and a master’s degree in aerospace engineering from Stanford University. Before joining NASA, Hopkins was a flight test engineer with the U.S. Air Force. Follow Hopkins on Twitter.

Victor Glover is the pilot of the Crew Dragon spacecraft and second-in-command for the mission. Glover is responsible for spacecraft systems and performance. He also will be a long-duration space station crew member. Selected as an astronaut in 2013, this is his first spaceflight.

Shannon Walker is a mission specialist for Crew-1. As a mission specialist, she works closely with the commander and pilot to monitor the vehicle during the dynamic launch and re-entry phases of flight. She also is responsible for monitoring timelines, telemetry, and consumables. Once aboard the station, Walker will become a flight engineer for Expedition 64. Selected as a NASA astronaut in 2004, Walker launched to the International Space Station aboard the Russian Soyuz TMA-19 spacecraft as the co-pilot, and spent 161 days aboard the orbiting laboratory. More than 130 microgravity experiments were conducted during her stay in areas such as human research, biology, and materials science. A Houston native, Walker received a Bachelor of Arts degree in physics from Rice University, as well as a Master of Science degree and a doctorate in space physics, both from Rice University, in 1992 and 1993, respectively.

Soichi Noguchi also is a mission specialist for Crew-1, working with the commander and pilot to monitor the vehicle during the dynamic launch and re-entry phases of flight, and keeping watch on timelines, telemetry and consumables. Noguchi also will become a long-duration crew member aboard the space station. He was selected as an astronaut candidate by the National Space Development Agency of Japan (NASDA, currently the Japan Aerospace Exploration Agency) in May 1996. Noguchi is a veteran of two spaceflights. During STS-114 in 2005, Noguchi became the first Japanese astronaut to perform a spacewalk outside the space station. He performed a total of three spacewalks during the mission, accumulating 20 hours and 5 minutes of spacewalking time. He launched aboard a Soyuz spacecraft in 2009, to return to the station as a long-duration crew member. The Crew Dragon will be the third spacecraft Noguchi has flown to the orbiting laboratory. Follow Noguchi on Twitter and Instagram.

The crew will conduct science and maintenance during a six-month stay aboard the orbiting laboratory and will return in spring 2021. It is scheduled to be the longest human space mission launched from the United States. The Crew Dragon spacecraft is capable of staying in orbit for at least 210 days, as a NASA requirement.

Crew Dragon also is delivering more than 500 pounds of cargo, new science hardware and experiments inside, including Food Physiology, a study of the effects of an optimized diet on crew health and, Genes in Space-7, a student-designed experiment that aims to better understand how spaceflight affects brain function, enabling scientists to keep astronauts healthy as they prepare for long-duration missions in low-Earth orbit and beyond.

Among the science and research investigations the crew will support during its six-month mission are a study using chips with tissue that mimics the structure and function of human organs to understand the role of microgravity on human health and diseases and translate those findings to improve human health on Earth, growing radishes in different types of light and soils as part of ongoing efforts to produce food in space, and testing a new system to remove heat from NASA’s next generation spacesuit, the Exploration Extravehicular Mobility Unit (xEMU).

During their stay on the orbiting laboratory, Crew-1 astronauts expect to see a range of uncrewed spacecraft including the next generation of SpaceX cargo Dragon spacecraft, the Northrop Grumman Cygnus, and the Boeing CST-100 Starliner on its uncrewed flight test to the station. They also will conduct a variety of spacewalks and welcome crews of the Russian Soyuz vehicle and the next SpaceX Crew Dragon in 2021.

At the conclusion of the mission, the Crew-1 astronauts will board Crew Dragon, which will then autonomously undock, depart the space station, and re-enter Earth’s atmosphere. Crew Dragon also will return to Earth important and time-sensitive research. NASA and SpaceX are capable of supporting seven splashdown sites located off Florida’s east coast and in the Gulf of Mexico. Upon splashdown, the SpaceX recovery ship will pick up the crew and return to shore.

NASA’s Commercial Crew Program is delivering on its goal of safe, reliable, and cost-effective transportation to and from the International Space Station from the United States through a partnership with American private industry. This partnership is changing the arc of human spaceflight history by opening access to low-Earth orbit and the International Space Station to more people, more science, and more commercial opportunities.

The space station remains the springboard to NASA’s next great leap in space exploration, including future missions to the Moon and, eventually, to Mars. For more than 20 years, humans have lived and worked continuously aboard the International Space Station, advancing scientific knowledge and demonstrating new technologies, making research breakthroughs not possible on Earth. As a global endeavor, 242 people from 19 countries have visited the unique microgravity laboratory that has hosted more than 3,000 research and educational investigations from researchers in 108 countries and areas.