#AceNewsReport – Nov.19: Thousands of protesters in Thailand converged on the police headquarters in Bangkok on Wednesday night, defacing the building a day after dozens injured as violent protests left dozens injured: Angered by the government’s decision to reject a constitutional reform proposal – a key demand of protesters – and alleged police violence, demonstrators hurled buckets of colourful paint and sprayed graffiti on the Royal Thai Police headquarters’ building facade: 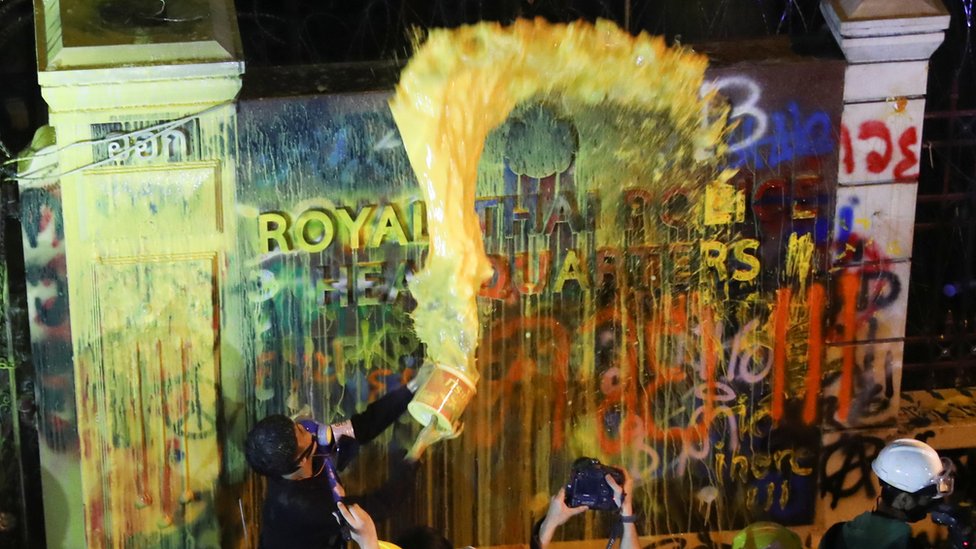 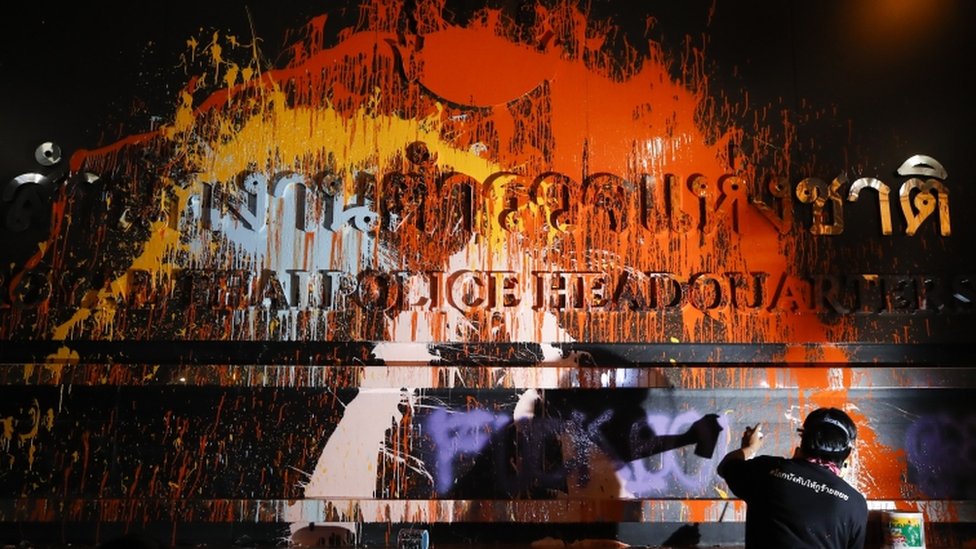 ‘ Police barricaded themselves inside the station and did not intervene ‘

Thailand has been rocked by student-led protests for months, with protesters demanding constitutional reforms, the removal of the country’s prime minister and changes to the monarchy: On Tuesday, Thailand experienced its most violent protests in months as protesters clashed with police officials: At least 40 people were injured as protesters hurled smoke bombs and bags of paint at police, who retaliated with water cannon and tear-gas solution:

Protesters had been attempting to reach the country’s parliament where lawmakers were debating possible changes to the constitution, including a controversial proposal by civil group the Internet Dialogue on Law Reform (iLaw) which many protesters supported: Their proposal called for a more transparent and democratic government, and reforms that would ensure only an elected MP could become prime minister. Thailand currently has a system where its parliament can nominate a non-elected person as PM:

On Wednesday evening, that proposal was rejected, prompting renewed protests: “We came here solely because of our anger,” one of the protest leaders, Panusaya “Rung” Sithijirawattanakul, told news agency Reuters and protesters are willing to break the law

Protesters threw glass bottles over the walls of the police headquarters, which was barricaded with concrete blocks and razor wire: Others sprayed anti-royal slogans on walls, and defaced a pedestal which bore a picture of Thailand’s Queen Mother Sirikit, though her portrait was left untouched: Giant inflatable rubber ducks also made an appearance – they first popped up on Tuesday and were used as shields against water cannon.

By Thursday morning, the police headquarters had been painted white, leaving few traces of the previous night’s demonstration: But the protesters have already vowed to return, with another rally scheduled for next week: