#AceNewsReport – Nov.23: The building dates back to the first century and the site is now home to the Sisters of Nazareth Convent: In modern times, it was first identified as the house where Jesus grew up with Joseph and Mary in the 19th century, but the theory was dismissed in the 1930s and has been rejected ever since: However, after 14 years of fieldwork and research on the site, Ken Dark, a professor of archaeology and history at Reading University in the UK, has found that the convent stands on a dwelling that ancient Nazarene believed was Jesus’ first home: Significant chunks of the building survive, including a rock-cut staircase. In its first-century heyday, it probably included a number of living and storage rooms around a courtyard, and a roof terrace: 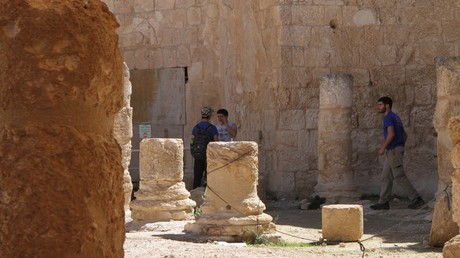 Professor Dark discovered that people in the area believed that the building was Jesus’ house from at least the 380s: His analysis also confirmed the building’s status as a first-century dwelling. No such case can be made for any other sites in the city: The archaeologist’s investigation of the two-story house revealed excellent craftsmanship and an understanding of rock that would be consistent with it having been built and owned by a tekton – the description of Joseph’s profession in the Greek gospels, which means that he was not only a carpenter, but also a stonemason or builder:

His fieldwork also indicates that a cave church decorated with mosaics was built next to the house’s remains in the fourth century. In the fifth century a church was built over both the house and the cave church and it was the largest church in Nazareth at the time: This church was elaborately decorated with marble and mosaics and it exactly matched a seventh-century description of the large Byzantine church that was said to have stood on the site of Jesus’ home and was an important pilgrimage destination:

In his book, ‘The Sisters of Nazareth Convent: A Roman-Period, Byzantine and Crusader Site in Central Nazareth’, Professor Dark probed the likelihood of memory of a building’s history being transmitted from the first century to the fourth century, when the first church was built at the site. “My conclusion is that, from anthropological evidence and studies of oral tradition, there’s absolutely no reason why they couldn’t have known,” he said: