﻿#AceNewsReport – Dec.12: French President Emmanuel Macron insisted on Friday that when it comes to post-Brexit fishing rights, he doesn’t want to have his cake and eat it, but that he’s certainly not going to give his piece away either: The European Commission released contingencies measures for a no-deal Brexit on Thursday which includes a proposal “to create the appropriate legal framework” granting EU and UK fishermen reciprocal access to each other’s waters until December 31, 2021, or until a fisheries agreement is struck, “whichever date is earlier”……Macron was asked on Friday about this contingency measure during a press conference on the sidelines of a meeting of EU leaders in Brussels:

Macron on EU-UK fishing feud: ‘I’m not giving my piece of cake away’ but even reciprocal access does not mean French waters even for one year ….. 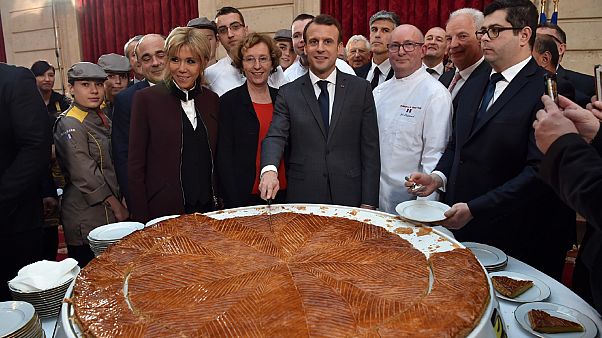 French president Emmanuel Macron (C) and his wife Brigitte (L) cut slices of a traditional epiphany cake during a ceremony at the Elysee palace, on January 12, 2018 – Copyright Credit: AFP

” The European Commission suggested yesterday that European fishermen could continue to fish in British waters after a no-deal. Do you, Mr President, want to have your cake and eat it?,” Daily Mail journalist James Franey asked:

The French leader replied: “I don’t know what information you are referring to but it depends on whether there is an agreement on future relations or not and on the transitional measures that will be taken with regard to fisheries.” ………” We know the terms, and I’m consistent, so no, I don’t want to have my cake and eat it but I do want the pieces cut equally because I’m not giving my piece away,” he added:

Negotiations for a deal to define the future relationship between the European Union and the UK are still ongoing with just three weeks to go until the end of the transition period: Fishing rights and competition rules are the key areas where “very large gaps” between the two sides remain:

Prime Minister Boris Johnson and Commission chief Ursula von der Leyen said: Wednesday following a face-to-face meeting that a “firm decision” on a deal would be made by Sunday (December 13).

Do you think this will be enough ?

Macron reiterated on Friday that the 27 member states of the Union remain united on a common approach: ” I respect all the parties involved and I hope that everyone can come out with an agreement that, on the one hand, preserves the European interest — I remind you that Europeans did not choose Brexit — and, on the other hand, respects our British friends and allows us — because geography is stubborn — to continue to live side by side even after Brexit,” he went on.