#AceNewsReport – Dec.13: Al Mashhad Al Araby says that the man who was killed was stabbed in the neck, recalling Qur’an 47:4, “When you meet the unbelievers, strike the necks.” Cairo 24 says that one of the victims was “psychologically disturbed,” so we see that the “jihad attacks are just manifestations of mental illness” dodge, so popular in the West, has made its way to Egypt:

“ White weapons” are cold weapons, that is, ones that are not fired, i.e., knives’ 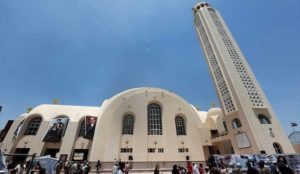 Cairo – “Al-Quds Al-Arabi”: A Coptic citizen was killed and two others were injured in a stabbing incident by attackers in the city of Alexandria in northern Egypt, Friday morning.

Eyewitnesses revealed that a number of Copts were stabbed with white weapons while they were near the Church of Saint Damiana in the Wardian area in Alexandria Governorate, northern Egypt, which resulted in the death of a citizen named Ramses Boulos, and the injury of two others, who were transferred to the hospital in a critical condition.

According to witnesses, they attacked three Coptic stores near the church and destroyed their goods, while chanting insulting phrases to the Copts, before they slaughtered Ramses Boulos Hermina (47 years) and stabbed his brother Adel Boulos Hermina (60 years), then Tariq Fawzi Shenouda was attacked, an owner of clothing stores.

The incident came at a time when Copts remembered, on Friday, the fourth anniversary of the victims of the terrorist attack that targeted the Patriarchal Church in 2016, in which 29 people were killed and 31 others were injured.

It is noteworthy that the Cathedral of St. Mark in Abbasiya, on the morning of December 11, 2016, witnessed a huge explosion during the celebration of the Divine Liturgy, as a result of the detonation of a 12 kg bomb inside it, killing 29 people and wounding 31 others.