#AceNewsReport – Dec19: Elsewhere, parts of Carmarthen have flooded after the River Towy burst its banks: Flood warnings and alerts remain in place across Wales: Natural Resources Wales (NRW) warned people to “take extra care and keep a safe distance” from river banks: Mr Morgan said the Wattstown site has been the focus of drone checks every two weeks after a landslip at nearby Tylorstown in February: 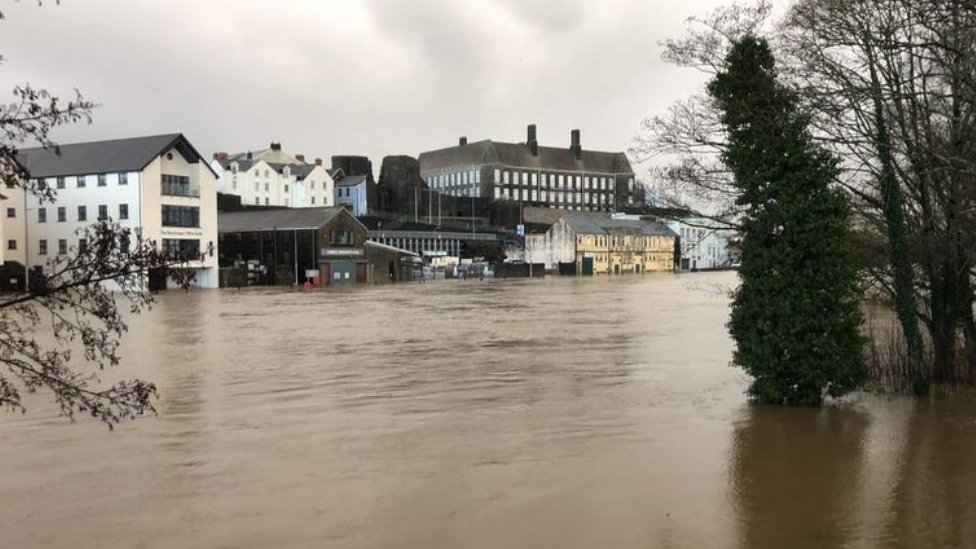 Dafydd Williams
The River Towy at Carmarthen flooded on Saturday

No properties are in the vicinity of the latest landslip, he said: “It looks far worse than it is but it’s the second landslip this year,” he said.

Rhondda MP Chris Bryant said “everything that needs to be done will be done” Wales is set to get £31m for essential flood repairs. The money would help repair areas – including coal tips – damaged by Storm Dennis in February……………..A Welsh Government spokesperson said it had “already commissioned work to develop options” for the Wattstown site and it would work with council and the Coal Authority to provide “necessary support”.

‘ Carmarthenshire was severely flooded by the River Towy, with local businesses badly affected: Dafydd Williams, from Llangunnor, said: “”High tide was 09:30 GMT this morning and we’ve got another high tide again around 16:30 GMT, so another coming in this afternoon ‘

” Businesses have already been badly hit by Covid and having to close at 18:00 every day, now they’re clearing stock from where they’ve been flooded.”

Parts of the Brecon Beacons had the most rainfall in Wales on Friday – with 98mm falling at Llyn-y-Fan in Carmarthenshire, making it the third wettest place in the UK: The village of Tyn-y-Waun in Bridgend county was Wales’ second wettest with 82mm (3.2in) on Friday, according to NRW data: That compares to Wales’ average December rainfall of 166mm (6.5in) for the whole month: Meanwhile, the A4042 has been shut at Llanellen, near Abergavenny, due to the overnight weather, but rail services have resumed between Knighton and Llandrindod, in Powys, after flooding: Natural Resources Wales (NRW) warned people to “take extra care and keep a safe distance” from river banks:

It comes after the Met Office issued a weather warning for rain on Friday: NRW’s flood warnings and alerts cover the River Teifi at Newcastle Emlyn, Llandysul, Llechryd and Cenarth; the River Wye at Monmouth; the River Cothi at Pontargothi and Pontynyswen; the River Towy at Carmarthen Quay, Llandeilo and Abergwili; the River Cynin at St Clears; and the River Ritec at Tenby: In north Wales, it has warned about possible flooding in the Lower Dee Valley from Llangollen to Trevalyn Meadows, near Wrexham: NRW warned said “many rivers will be fast flowing and dangerous”