#AceNewsReport – Dec.28: Chechen leader Ramzan Kadyrov said one other police officer was injured by the “terrorists” but his condition is stable: The two attackers were shot dead by authorities at the scene: No civilian casualties have been reported: The assailants have been identified by authorities as two brothers from the neighbouring region of Ingushetia, who moved to Chechnya in 2012 and worked in a bakery: 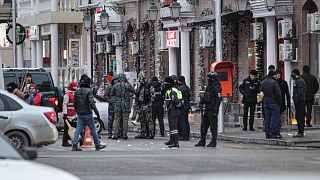 The attack took place in the centre of the provincial capital, Grozny. – Copyright AP Photo/Musa Sadulayev

” On Monday: Two terrorists armed with knives attempted to seize the weapons of the patrol police officers who were serving in the centre of Grozny,” Kadyrov said on his Telegram messaging account………” I express my deep condolences to the family, relatives, and friends of the heroically deceased police officer.”

The Kremlin has relied on Kadyrov to stabilise Chechnya and has provided generous subsidies to help rebuild the region: But international human rights groups have accused the Chechen leader of rampant rights abuses, including arbitrary arrests and extrajudicial killings: Despite a crackdown on suspected extremists in the region, some of whom have sworn allegiance to the Islamic State group, militants have continued to launch sporadic attacks in Russia’s North Caucasus:

Earlier this month, two people described as “terrorists” by the authorities were killed after throwing an explosive device at a police patrol during a routine check-up: Meanwhile, in October, at least six people, including two law enforcement officers, were killed in a shoot-out during a police “counter-terrorist” operation in Grozny: