﻿#AceNewsReport – Jan.04: At the height of the search for London schoolgirl Nóra Quoirin, more than 350 people including elite military and civilian volunteers scoured the dense Malaysian jungle. The recorded sound of her mother’s voice calling out Nóra’s name echoed through the rainforest in the hope she would hear her and walk towards her. But the teenager never did:

Nóra Quoirin death: The schoolgirl who vanished into a Malaysian jungle 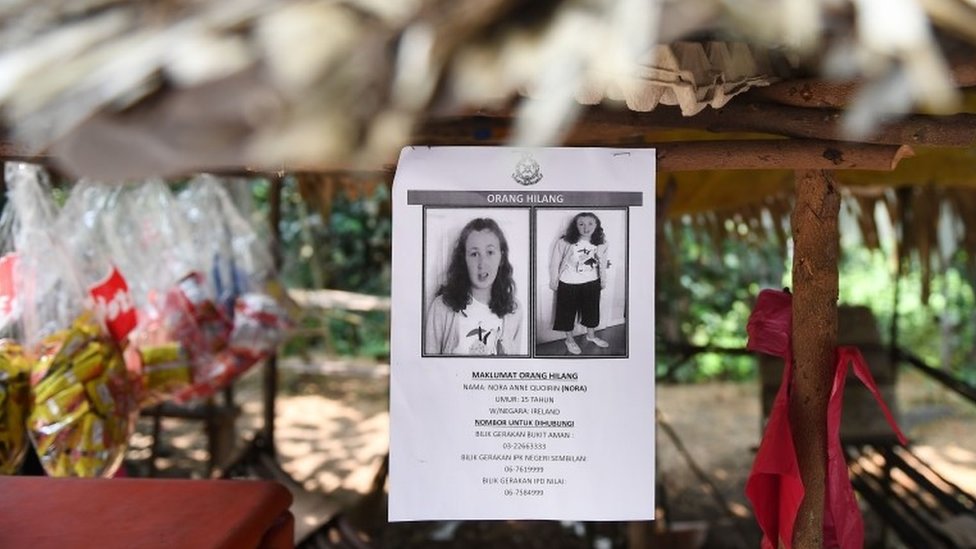 AFP
Nóra went missing the day after she and her family arrived in Malaysia in August 2019:

On the evening of 3 August 2019, Belfast-born Meabh Quoirin had heard a voice inside the chalet she was sharing with her family: It was the first night of their two-week holiday near Seremban, about 40 miles (65 km) south of the Malaysian capital Kuala Lumpur: Meabh, who was jetlagged after the family’s long-haul flight, soon fell back into a deep sleep: A few hours later, just after 07:00 local time, Meabh’s French husband Sebastien went to check on their three children, Nóra, 15, Innes, 12, and Maurice, eight: Nóra was nowhere to be seen. A window in the chalet had been left open: The likelihood that Nóra had wandered off seemed remote to her parents. Their daughter had a condition called holoprosencephaly, a disorder that affects brain development, and it was not something they could imagine her doing: Again and again, Meabh and Sebastien searched the chalet and the resort in vain: The family raised the alarm amid fears she had been abducted. Extensive searches of the nearby jungle by police turned up no trace: Nine days after she went missing, Nóra’s naked body was found by a group of volunteers in the jungle, only a couple of miles from the resort: An initial post-mortem report said Nóra had died due to gastrointestinal bleeding from hunger and stress over a prolonged period: However, Nóra’s mother maintained the report did not explain how her daughter had ended up where she was eventually found:

The family pressed for an inquest after the Malaysian Attorney General’s Chambers declared “there was no case to answer” for any criminal proceedings: Determined to find answers, the family knew the inquest was going to be crucial in determining the fullest possible picture of what happened to Nóra: Malaysian police had always treated Nóra’s disappearance as a missing person case and insisted at Seremban Coroner’s Court there was no suggestion of abduction, kidnap or foul play.

“There is the possibility that the missing person had woken up from sleep – maybe she wanted to go to the toilet – and was confused by the Sora House, which is new to her, and left the Sora House on her own,” investigating officer Insp Wan Faridah Mustani told the inquest.

This is a theory Nóra’s family disagree with…….

Maebh, 45, is also highly critical of the Malaysian police’s handling of the early stages of the investigation.

After reporting Nóra missing, police officers arrived at the Dusan resort, not “realising the seriousness of the problem”, Sebastien said.

The sniffer dog was also “not fit for purpose” and became “exhausted after two minutes”, he said.

“I was really worried that if she was by herself she would hurt herself very quickly and very seriously,” Meabh told the BBC.

The family pointed to the open window they insisted they had closed the night they put Nóra to bed.

A police officer told the inquest it was open wide enough for an adult to climb through it.

The resort’s owner Helen Todd told the inquest she had run the Dusan resort for more than 30 years and had “never had a burglary” or any intruders.

Mrs Todd accepted that part of the resort’s boundary fence had fallen down, but said Nóra would still have had to clamber over it, and the other side was thick with undergrowth.

Meabh insisted that had Nóra wandered outside she would have frozen on the spot and waited, adding that the teenager had difficulty walking unassisted due to weak core strength and she would tire easily.

These statements were endorsed by Michael Reeves, the head teacher of Nóra’s school in Balham, south London, who said the 15-year-old would not have had the confidence to walk off on her own.

He said: “Physically she was one of the most vulnerable pupils in the school, because of her balance issues: “Nóra’s gait was quite fragile. She really didn’t have the confidence to walk off by herself: ” The idea of Nóra climbing over fencing is unimaginable. She might have climbed over something a foot or so high, but no more than that.”……As images of Nóra were emailed to Interpol databases in Ireland, France and the UK, requests were also made to get fingerprints and medical records: CCTV was also obtained from the day the family arrived at Kuala Lumpur Airport, which the police said showed Nóra walking unassisted and even dragging her suitcase: Based on this, Supt Mohamad Nor Marzukee Besar said police had assumed it was possible for her “to go towards the mountain”.

As the number of days Nóra had been missing grew, the search for her remained intensive: The recording of Meabh’s voice trying to coax Nóra out of the jungle continued to echo through the trees: Lying face down on a rock close to a stream, with her hands and feet immersed in water, Nóra’s unclothed body was discovered by civilian volunteer Chong Yue Fatt: Mr Chong said he had to wait hours for authorities to arrive.

He told the inquest: “We told all group members not to come close to the body, because [we were] afraid we would tamper any evidence. We just waited until assistance arrived.” ……….Nóra’s body was lifted into a helicopter which took her to Tuanku Jaafar Hospital where she was formally identified by her parents: The investigation now hinged on post-mortem results, which found Nóra had died three days before her body was found: Further autopsies carried out both in Kuala Lumpur and London both concluded that Nóra had died because of a heavily ulcerated upper intestine caused by extreme stress and lack of food:

Both pathologist teams agreed that although Nóra had not been physically attacked or raped, they could not totally rule out lesser forms of abuse: Senior British pathologist Dr Nathaniel Cary, who has expertise in missing persons cases, said scratches on Nóra’s torso, legs and feet were consistent with her moving through the dense jungle: The area had been checked by a search-and-rescue team five days before the teenager’s body was found, with police suggesting Nóra had been “alive and moving” during the first stages of the search: The spot was examined once more after the teenager’s family raised the question of where her underwear had ended up. Due to the heat, it was all she had been wearing when she went to bed: But despite the extra search, Nóra’s clothes were never found in the jungle: DNA samples were collected from the house where the Quoirin family had been staying, as well as in nine cars and a wooden hut near to where Nóra’s body was found: No DNA traces of Nóra were found in the nine cars, nor in the wooden hut: There were, however, DNA traces of two unknown males on cigarette butts found in the hut: It is one of many questions that were not answered at Nóra’s inquest: Coroner Maimoonah Aid’s misadventure recording has deepened the anguish for the Quoirin family.

All they want is to uncover the truth surrounding the mystery of their daughter’s disappearance and bring those responsible, if any, to justice.

Louise Azmi, a lawyer for the Quoirin family, said they had pressed for an open verdict to reflect the lack of positive evidence in the case regarding what happened to Nóra. Such a verdict would have left open the possibility that a criminal element was involved in Nóra’s death.

Based on everything the family know of Nóra, “they continue to believe it is impossible she would have willingly walked away into the jungle”, Ms Azmi said.

3 August: The Quoirins arrive at the Dusun forest eco-resort

4 August: Nóra disappears from her room

5 August: The Lucie Blackman Trust says Malaysian police are treating Nóra’s disappearance as a potential abduction, but officers deny any foul play is thought to be involved

6 August: Nóra’s family say they believe she has been abducted

11 August: Malaysian police set up a hotline dedicated to receiving information about teenager

12 August: A reward of £10,000 – donated by an anonymous Belfast business – is made available for information leading to Nóra’s safe return

13 August: A body is found in the search for Nóra