#AceNewsReport – Jan.11: Tsarnaev, now 26, accuses guards and the warden at the Federal Correctional Complex Florence — called the “Alcatraz of the Rockies” — of being “unlawful, unreasonable and discriminatory.”………………….He specifically cites the confiscation of his white baseball cap and bandana that he purchased at the prison commissary and not being able to take more showers: He adds the harsh treatment has made his life inside the prison’s H-Unit so anxious it is adding to his “mental and physical decline.”

Claims loss of his hat, bandana and only 3 showers a week causing anxiety 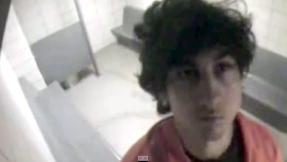 A video image from a jail surveillance camera of Boston Marathon bomber Dzhokhar Tsarnaev in jail that was presented in his trial by his defense team during his sentencing phase of his trial. (Courtesy of Bostondefender.org.)

The lawsuit was filed Monday and assigned to a federal judge, according to court records: But the judge stated Tuesday the “filing is deficient” because it does not include a “certified copy of prisoner’s trust fund statement” and a $402 filing fee: Tsarnaev alleges his baseball cap and bandana were confiscated by prison guards “because, by wearing it, I was ‘disrespecting’ the FBI and the victims” of the April 15, 2013, Boston Marathon bombing: “ There is no proof and no evidence to support (the) false accusation,” Tsarnaev alleges in his eight-page lawsuit posted on the federal court system: It is not explained why his cap may have offended anyone, but before the world knew Tsarnaev’s name, he was referred to by investigators as the prime suspect in a “White Hat” worn backward seen leaving the scene of the Boylston Street bombings. That same hat — a Polo cap — was used as evidence in his death penalty sentencing:

Tsarnaev’s death sentence was thrown out last fall over concerns with the jury selection process: Federal prosecutors are asking the U.S. Supreme Court to review the case, calling it “one of the most important terrorism prosecutions in our nation’s history.” ………If the nation’s highest court does not rule, prosecutors can leave Tsarnaev locked up for life without parole or seek a new death penalty trial.

Former Florence prison warden Bob Hood told the Herald on Wednesday that Tsarnaev’s lawsuit is common among inmates: “I get it. He wants more than three showers a week,” Hood said. “But he’s twentysomething living in a 7-foot box where life is worse than if he did get the death penalty.”

(Boston, MA, 03/25/15) The white cap that Dzhokhar Tsarnaev was wearing the day of the bombing – presented as evidence during the federal death penalty trial of Dzhokhar Tsarnaev, in the federal courthouse where Tsarnaev is being tried in Boston on Wednesday, March 25, 2015. Tsarnaev is charged with conspiring with his brother to place two bombs near the Boston Marathon finish line that killed three and injured more than 260 spectators in April 2013. Staff photo by Christopher Evans: