#AceNewsReport – Mar.26: Hundreds of thousands of farmers have been protesting on the outskirts of Delhi for nearly two weeks, blocking many of the main arteries into the capital: Farmers are protesting against laws that deregulate the sale of crops, allowing private buyers more free rein in a marketplace that has long been dominated by government subsidies. Farmers say the reforms to laws that have long protected small landholders’ place in the market will put them at risk of losing their businesses and land to big corporations:

Farmers fighting against Modi reforms but the government says the reforms are necessary to increase the efficiency of India’s huge but meager farming sector, which accounts for nearly half of the country’s workforce but makes up only 16% of GDP:

The explosive demonstrations show the difficulty the Indian government faces passing economic reforms in such a large sector where there are many vested interests. It is also an example of an emerging trend of Prime Minister Narendra Modi’s popular government running into trouble after pushing through significant laws unilaterally.

Here’s what to know about the Indian farmer protests:

The protests began in August in the states of Punjab and Haryana, and marched on Delhi in November. There, they were met by a heavy-handed police response. Officers used tear gas and water cannon on protesters in late November. And on Dec. 1 they detained Bilkis, an 82 year-old woman who became a figurehead of demonstrations against a controversial citizenship law earlier this year, who joined the farmers out of solidarity. Farmers received worldwide shows of support too, with diaspora communities protesting on their behalf in the U.K. and Canada. 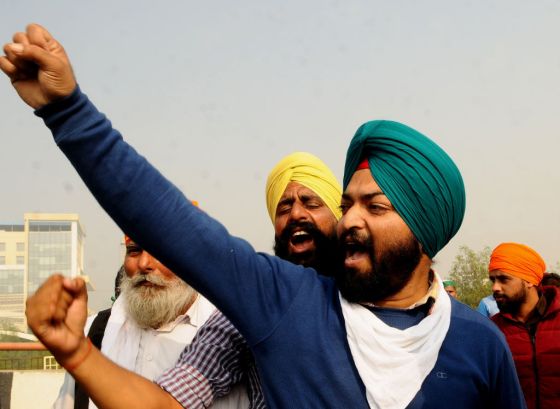 Although some economists say the reforms are necessary, many have criticized the manner in which the laws were imposed. In September, at the height of the pandemic in India, the government succeeded in passing three agricultural reform laws in a short session of parliament, using a parliamentary maneuver to push through the reforms in the upper house. There was also barely any consultation with farmers. “The government did not consult a single farmers’ organization,” says Yogendra Yadav, the national president of Swaraj India, a political party that is supporting the farmers’ demands.

What are the Indian government’s reforms?

Since India’s “Green Revolution” in the 1960s, the Indian government has run a scheme where it guarantees farmers a set price for certain crops. Combined with advances in farming technology, that system has helped India move from widespread hunger to big annual food surpluses. When the COVID-19 pandemic hit in March, officials estimated there would be 100 million tons of grain available to see India through the lockdown, enough to last at least 18 months. But the system has also affected crop diversity, impacted the environment and disproportionately benefited larger farms over smaller ones.

The new laws do not eradicate the guaranteed minimum prices, which will remain in place. But they do get rid of previous restrictions on corporations buying land and stockpiling commodities beyond a certain level. They allow businesses to bypass markets where farmers’ produce is normally sold, and strike direct deals that farmers worry will be less subject to regulations. They also outlaw the practice of stubble burning, a change that farmers have demanded be reversed despite its environmental benefits.

“There’s no doubt that agriculture and markets need a lot of very serious public investment and reform,” says Mekhala Krishnamurthy, a senior fellow at the Centre for Policy Research, a New Delhi think tank. “We have a situation where Indian agriculture is the site of enormous livelihoods and economic opportunity, but it has also been riddled with huge challenges and a lot of economic distress.”

Why have farmers been resistant to the reforms?

While the government says the new laws will “empower farmers,” farmers’ unions say that the rule changes are not policies they have asked for. Instead, they fear that instead of trying to help farmers, the government is opening the door to big corporations who may eventually force them off their land and out of business.

“For many years, a certain agri-business lobby, backed by some of the biggest corporations in the county, has been wanting to enter agriculture,” says Yadav, of Swaraj India. “Similar proposals were put to previous governments as well, but no government had the political courage to do it because they knew it would be very unpopular with the farmers. There are large groups which want to enter agriculture. The problem is the laws in the country which do not allow big corporations to purchase land.”

What farmers really want, says Yadav, is the government to actually guarantee that its minimum prices for farm produce are accessible to all farmers. Currently, Yadav says, as many as 80% of farmers don’t receive the promised amount. “The government announces the minimum support price every year, but it remains on paper,” he says. “Because the government doesn’t back it with a system where farmers are actually assured that price.”

How widespread are the protests, and what is likely to happen next?

Farmers from across north India have resisted the reforms, but the protests have by and large been led by unions from Punjab and Haryana, two relatively prosperous states where the government-mandated markets are most developed, and where the government buys a majority of the wheat and rice produced by farmers.

The protests so far have won the unions access to the government for negotiations. Three rounds of talks have happened so far, but have been inconclusive. More are scheduled for Wednesday. “The protests and the negotiations are the beginning of a process that should have started at the beginning,” Krishnamurthy says. “When you bring consequential reforms like this, without having adequate consultation and consensus building, there is a genuine expression of anxiety and concern.”