#AceNewsReport – Apr.09: Hungary’s right-wing Prime Minister Viktor Orban has claimed a landslide victory in Sunday’s general election: The 54-year-old will serve a third consecutive term in office, with his party Fidesz projected to keep its key two-thirds majority in parliament……….Fidesz won almost half of the vote, with 93% of ballots counted, Hungary’s National Election Office said: Mr Orban is a strong Eurosceptic who campaigned on an anti-immigration platform………In a speech to supporters on Sunday night, Mr Orban said his victory gave Hungarians “the opportunity to defend themselves and to defend Hungary”………Leaders of the second and third-placed parties have resigned in light of the result #AceNewsDesk reports 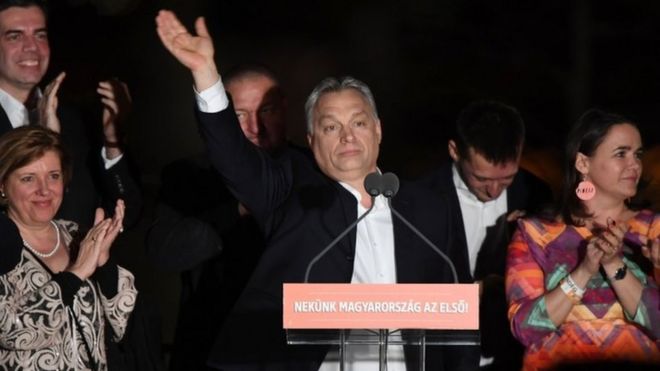 Viktor Orban (c) will be prime minister for a third time

How did the result play out?

Polling stations were meant to close at 19:00 (17:00 GMT), but some stayed open hours later due to long queues. Voter turnout reached a near-record 69% – an outcome some believed would favour the prime minister’s opponents.

But with almost all votes counted, the nationalist Jobbik party is in second place with 20% of the vote. The Socialists are in third with 12%, and the LMP, Hungary’s main Green Party, is in fourth with 7%.

Jobbik’s chairman Gabor Vona stood down on Sunday night, telling a news conference: “Jobbik’s goal, to win the elections and force a change in government, was not achieved. Fidesz won. It won again.”

Socialist Party President Gyula Molnar was similarly downcast as he resigned, saying: “We regard ourselves as responsible for what happened [and] we have acknowledged the decision of voters.”

Orban keeps the provinces but loses the youth vote

As Fidesz paints the map of Hungary orange (their colour) once again, preliminary results show they will reach the 133 seats in the 199 seat Parliament needed for a constitutional two-thirds majority. They won two-thirds victories at both previous elections, in 2010 and 2014.

The prime minister’s party won in most rural constituencies and in provincial towns, while opposition parties took most seats in the capital, Budapest.

Mr Orban’s legitimacy on a European level will likely be strengthened, as nationalist parties across the continent take heart from his victory.

There were only two consolation prizes for anti-Fidesz voters: most constituencies in the capital, Budapest, went to opposition candidates. And Fidesz have also lost a large part of the youth vote. The next Fidesz government can be expected to include younger ministers, in an attempt to address this problem.

The result spells trouble ahead for civil society groups which campaign for human rights and against corruption, and for critical media. Viktor Orban has promised a “settling of accounts – moral, politically, and legally” with his opponents.

What are Orban’s policies?

The election campaign was dominated by immigration, with Mr Orban promising to defend the country’s borders and block migration by Muslims.

The prime minister refused to debate publicly with his opponents or speak to the independent media, speaking instead at rallies for his supporters.

These addresses focused on one core policy – stopping immigration.

“Migration is like rust that slowly but surely would consume Hungary,” Mr Orban said at his final rally on Friday.

In 2015, Hungary built a fence along its borders with Serbia and Croatia to stop illegal migrants. 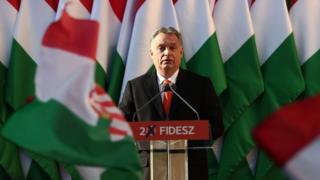 Mr Orban is an avowed Eurosceptic who opposes further EU integration. He refused to take part in the EU’s refugee resettlement programme and has praised Russian leader Vladimir Putin.

Marine Le Pen, leader of France’s National Front, tweeted Mr Orban her congratulations and said the “mass immigration promoted by the EU has been rejected once again”.

His administration has presided over strong economic growth, which he had argued would be threatened under the opposition.

Hungary’s Fidesz could pass ‘Stop Soros’ law in May: state news agency MTI
BUDAPEST (Reuters) – After its election victory, Hungary’s Fidesz party could pass a law in May that would empower the government to ban non-governmental organizations that support migration and pose a “national security risk”, a Fidesz spokesman said on Monday https://t.me/reuters_news/42063: Results suggest Hungary’s right-wing PM Viktor Orban is set for a comfortable win in elections BBC News https://bbc.in/2qgIJG8

#AceNewsReport – Mar.28: Worboys, 60, has served 10 years, including remand time, of an indeterminate prison sentence: At an earlier hearing, two of his victims deemed the decision to grant the rapist’s release “irrational”………..Worboys, who is now known as John Radford, was jailed in 2009 for assaults on 12 women in London, although police believe he committed crimes against more than 100 women between 2002 and 2008: He was convicted of one rape, five sexual assaults, one attempted assault and 12 druggingcharges……….After a hearing about his case in November, the Parole Board decided to approve his release with “stringent” licence conditions #AceNewsDesk reports 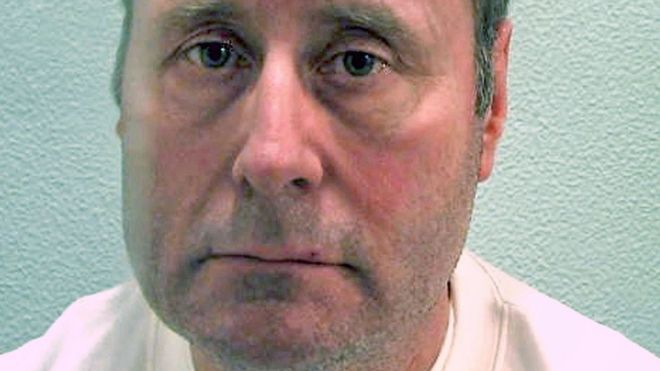 London Mayor Sadiq Khan, who lodged an application for a judicial review into the decision in January, deemed the move “astonishing and deeply concerning”.The two victims, who brought the case along with Mr Khan, say something went “badly wrong” with the Parole Board’s decision to free him.

Worboys, who has been watching the trial via video link from prison, became known as the black cab rapist after attacking victims in his hackney carriage.

In May 2015, after protesting his innocence for most of his sentence, he accepted responsibility for sexual offences against the 12 women.

His lawyer, Edward Fitzgerald QC, earlier told the court: “He has completed his tariff and he is therefore entitled to be released if it is not necessary for the protection of the public that he be detained.”

The Parole Board argues that its decision was “lawful and and rational” and was based on appropriate evidence.

#AceNewsReport – Mar.26: Editor says this is what we know so far of this deadly blaze that took hold on Sunday: People are coming to the scene of a deadly fire in Russia’s Siberian city of Kemerovo to express their condolences and commemorate those, who didn’t manage to escape the building devoured by the fire: Flowers and toys cover the place of the incident in remembrance of the horrifying number of innocent children who lost their lives #AceNewsDesk reports

The first reports of the fire surfaced on Sunday afternoon; the police encircled the area and began evacuating people. The emergency services reportedly deployed some 15 fire teams, while the national center for crisis management announced that over 660 people were engaged in emergency response activities. Witnesses have insisted that fire alarms in the trade center, which was completely packed, failed to go off, causing people to panic and rush through narrow corridors in a movie theater and children’s playground, filled with black smoke; some jumped out of windows to save their lives.

The head of the city’s fire department Sergei Yakovlev said that the blaze had spread via flammable thermal insulation that complicated the process of extinguishing the inferno.

The official cause of the conflagration has yet to be determined, although reports suggest that it could have been started by a child misusing a cigarette lighter or malfunctioning electrical wires.

In an interview with the channel Rossiya 24, child ombudsman Anna Kuznetsova has suggested that the reason for the fire was negligence of security norms.

“Negligence is the cause. All norms are written. But the way we treat these [security] norms is the catastrophic cause of the tragedy we have witnessed today,” Kuznetsova said.

Russia’s Investigative Committee has launched a criminal investigation into the case, having reportedly arrested four suspects, including the head of the management company, servicing the shopping mall.

Speaking about the tragedy on March 26, Kremlin spokesman Dmitry Peskov stated Kremlin had no information on the causes of the fire in the shopping center.

The spokesman went on by saying that it was not correct to make any claims against Kemerovo Region Governor Aman Tuleyev over the fact that he reportedly had not visited the site of the tragic incident.

An employee of a private security company (PSC) switched off an alarm system in a shopping mall in the Siberian town of Kemerovo, where a major fire claimed lives of more than 60 people, Russian Investigative Committee spokeswoman Svetlana Petrenko said Monday.

“The issue of detention of the fifth suspect, a PSC employee who turned off an alarm system after receiving a signal about the fire, is being discussed. Serious violations were committed both during the shopping center’s entry in service and in the process of its work. Fire exits in the shopping center were blocked,” the spokeswoman said, as quoted in the committee’s Telegram channel.

According to recent data, confirmed by the Russian Investigative Committee, the death toll has risen to 64 people. Earlier, a source with emergency services reported that 69 people were still missing, including 40 children.

“According to preliminary figures, a search for 41 children is ongoing,” the emergency center reported.

“Governor Aman Tuleyev declared mourning throughout the Kemerovo region on March 27, 28 and 29,” the spokesperson said.

Speaking about the accident, Russian Deputy Emergencies Minister Vladlen Aksyonov stated that up to the present moment a total of 17 victims of the deadly fire have been identified.Some 58 bodies out of 64 retrieved from #Kemerovo’s mall after fire https://t.co/uHo79m1KZZpic.twitter.com/GQOAHjaKkD after it’s revealed that a security guard switched off alarm system at #Kemerovo mall – Russian Investigative Committee https://t.co/uHo79m1KZZpic.twitter.com/YOqAqwdg7d— Sputnik
Sputnik March 26, 2018: