#AceNewsReport – Dec.01: Editor says that if a capitalistic society gets people to ‘ Consume ALL ‘ and continue to BUY BUY BUY then along come PROTESTORS against everything, the results is collapse of society …..but FIRST COMPANIES AND CORPORATIONS will try to SQUEEZE AS MUCH PROFIT FROM WORKERS by CUTTING EVERYTHING TO THE BONE …witness AUSTERITY and then change brings more PROFIT for them and SPEND SPEND SPEND for society …Chimera complete….

image1 1
“On the 20th anniversary of the protests against the World Trade Organization (WTO), evidence of its harm to workers, healthcare, farmers and particularly to developing countries – has proven its critics right.” — writes Deborah James for #AJOpinion https://t.co/82deRutd0R http://twitter.com/AJEnglish/status/1200870881586798592 November 30, 2019 at 08:15PM:

Al-Jazeera – On that cold winter’s day in Seattle, the proponents of the WTO model of corporate globalisation were seeking to launch a new “Millennium” round of liberalisation: Labour unions and environmentalists, development advocates and public interest groups voiced their opposition, and faced state security forces who doused them with tear gas and pepper spray, shot them with rubber bullets, and arrested them by the hundreds – the vast majority of whom were exercising their democratic rights

At the time of the protests, the WTO was less than five years old: But critics had already seen how the largest corporations in the world had succeeded in using its founding – and the good name of trade in promoting prosperity – to achieve a new set of agreements covering not just trade in goods but also trade-related investment measures, trade-related intellectual property (IP) rules, agriculture and services. 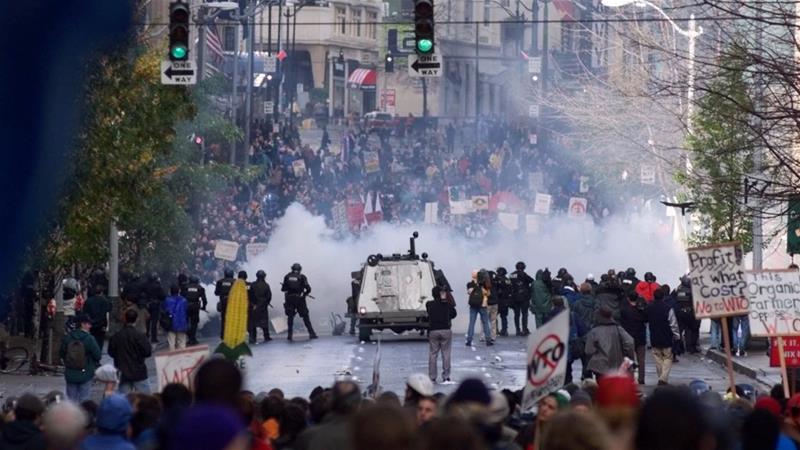 Seattle police use gas to push back World Trade Organization protesters in downtown Seattle on November 30, 1999. The protests delayed the opening of the WTO conference [AP/Eric Draper] [Daylife]

These new agreements, far from the original goals of multilateralism, gave new rights to trade (which are exercised by corporations) and constrained government regulation in the public interest: Predictions of increased jobs and prosperity under the WTO system have failed abysmally. Inequalities have soared, leaving hundreds of millions impoverished while billionaires metastasise like cancer.

This is because corporate elites hijacked “trade” and rigged the rules to distribute income upwards, while reducing protections for people who work: Highly paid professionals (like doctors) are protected (by being able to regulate their own licensing) and businesses are given market access rights and predictability.

Meanwhile………….workers are forced into unfair competition without a minimum floor for protections, and developing country workers have been kept at the lowest levels of the global value chains.