#AceNewsReport – Sept.12: Michelle Bachelet, the UN High Commissioner for Human Rights, whose Office (OHCHR) issued the report Tuesday, underscored that the findings show the severity of dangers independent journalists face in #Myanmar “Where journalists are jailed for merely visiting an area controlled by an armed group, when their sources are jailed for providing information from conflict zones, and where a Facebook post can result in criminal defamation accusations – such an environment is hardly conducive to a democratic transition,” she said #AceNewsDesk reports

According to the report, The Invisible Boundary: Criminal prosecutions of journalism in Myanmar, laws relating to telecommunications, official secrets, unlawful associations, electronic transactions and even obscure laws relating to imports and aircraft, have been used to try and prosecute journalists in recent years.

In one case, three journalists were arrested in June 2017 for covering an event to mark the International Day Against Drug Abuse and Illicit Trafficking in an area under the control of an armed group in northern Shan state. They were charged under the Unlawful Associations Act. The case was dropped, but not before they had spent 67 days in detention.

Together, the cases outline to journalists a clear choice between self-censorship and the risk of prosecution […] Given the importance of journalism for the public’s right to information, the restrictions imposed on media personnel have a broader implication in society – OHCHR report

In another case, two Christian Baptists from Kachin state, were arrested in December 2016 under the same law, for assisting journalists who had travelled to northern Shan state to report on the conflict there. They were held incommunicado for several weeks and eventually received prison sentences of two years and three months having also been charged under an Import-Export statute, relating to their alleged use of unlicensed motorbikes, the report states.

Other cases involved the invocation of the same Law against journalists for using a drone to film the national parliament building and a Telecommunications statute was used to target a journalist for posts on the social media site, Facebook.

The report also refers to “the instrumentalization of the law and of the courts by the Government and military in what constitutes a political campaign against independent journalism,” and the “failure of the judiciary to uphold the fair trial rights of those targeted.”

In conclusion, the report also sets out a series of recommendations, including a review of all legal provisions impacting the right to freedom of expression with a view to repealing or amending those that do not comply with international human rights law.

It also calls for the immediate and unconditional release of the two Reuters journalists, Kyaw Soe Oo (also known as Moe Aung) and Thet Oo Maung (also known as Wa Lone), as well as all other journalists currently in detention for the “legitimate and peaceful exercise of their right to freedom of expression”.

The two Reuters journalists were sentenced to seven years’ imprisonment under the Official Secrets Act in connection with their coverage of a massacre, by the military, of men from the minority Muslim Rohingya community in the Inn Dinn village, Rakhine state.

#Myanmar: New UN human rights report finds that “vague and over-broad” laws have made it impossible for journalists to do their job without fear or favour https://t.co/a9mTa3fgNG Published: September 11, 2018 at 09:06AM

#AceNewsReport – Aug.19: Egyptian President Abdel Fattah el-Sisi signed a new law on Saturday tightening the government’s control of the internet, state media reported: Aimed at combating extremism, the Anti-Cyber and Information Technology Crimes legislation prohibits the “promotion of the ideas of terrorist organisations” and allows authorities to block websites deemed by judges to be threats to national security……………………It also bans the dissemination of information on the movement of security forces and imposes strict punishments for hacking government information systems, according to the state-run Al-Ahram newspaper #AceNewsDesk reports

The legislation was originally approved by the Egyptian parliament in May

Since taking power in 2014, Sisi’s government has been criticised for blocking critical voices in the media and scrubbing digital content: Nearly 500 websites have already been blocked in Egypt since May 2017, according to the Cairo-based Association of Freedom of Thought and Expression. 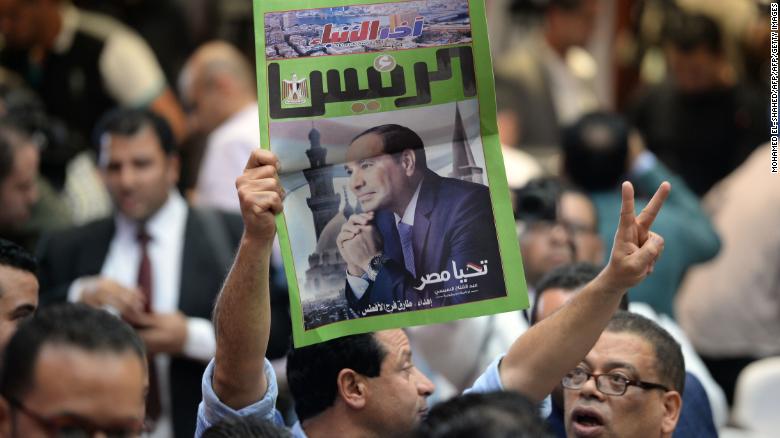 A man carries a newspaper bearing the portrait of President Sisi in Cairo on April 2.

The country’s parliament has also passed legislation strengthening the government’s ability to target social media in its continued efforts to crackdown on dissent. This includes categorizing social media accounts with more than 5,000 followers as public websites and therefore worthy of surveillance.

“Every day we receive reports about people from all levels of Egyptian society who have been persecuted for Facebook posts, tweets, art work, and even personal, unpublished writing that has fallen into the hands of the Egyptian authorities,” Najia Bounaim, Amnesty International’s director of campaigns in North Africa, said in a statement in July. 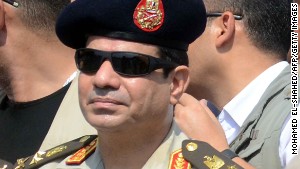 The regulations also require internet service providers to save and release personal information to security services upon their request and following the issuance of a judicial order, according to Mada, a Cairo-based journalism and media watchdog organization.

“While Egypt faces security threats, the government of President Abdel Fattah al-Sisi has exploited these threats cynically as a cover to prosecute peaceful critics,” Nadim Houry, director of terrorism and counterterrorism at Human Rights Watch, said in a statement. “Egypt is combining a bad law with unjust courts and the outcome has been predictably disastrous.”

Those found guilty under the new law can face fines of over $10,000 and up to two years in prison, Al-Ahram reported.

Law 175 in the year 2018, titled “Anti-Cyber and Information Technology Crimes,” was published on Saturday by the official Egyptian Gazette.

It prohibits “the dissemination of information on the movements of the army or police, the promotion of the ideas of terrorist organisations.” The law’s first chapter on penalties, from article 14 to 22, covers crimes of hacking information systems.

Article 20 imposes a fine ranging from EGP 50,000 to EGP 200,000 and a two-year prison sentence on individuals convicted of hacking state information systems.

The second chapter, from article 24 to 25, tackles crimes committed via information systems and technologies, and crimes related to emails.

Those found guilty of creating an email, a private account or a website using the name of another person or institution can be sentenced to three months in prison and fined between EGP 10,000 and EGP 30,000.

According to artical 7 of the new law, websites that publish material posing a threat to the country’s security or economy can be blocked through a judicial process.

The newly passed law was originally approved by the Egyptian parliament in May 2018.

#AN2014 says #FreeSpeech is the Right of All People

Vigil to mark Margaretta spending one month in jail for peace activism – Sat 15 Feb, 1-2pm@ The Spire, O’Connell St, Dublin. Please attend if you can

When Montana blogger Crystal Cox lost her defamation case in 2011, the decision was greeted by a chorus of cheers from journalists, who were quick to argue that Cox wasn’t a journalist in any real sense of the word, and therefore didn’t deserve any protection from the First Amendment. An appeals court for the Ninth Circuit has disagreed, however: on Friday, a panel of judges overturned the original decision and said that Cox was in fact entitled to protection.

The implications of this ruling go beyond just a single defamation case. It’s another link in a chain of decisions that are gradually helping to extend the principle of free-speech protection beyond professional journalism to anyone who is publishing information with public value — and as such, it helps shift the focus away from trying to define who is a journalist and puts it where it should be: on protecting…