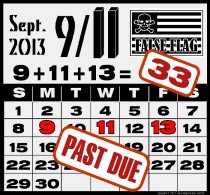 “An alarming amount of “chatter” is being heard about nuclear weapons with a number of respected & credible journalists and news commentators suggesting recent weapons movements in conjunction with a number of firings of high-ranking military officers suggest a possible nuclear false-flag.”

For those of you who are aware of the occult influence in the timing of FALSE FLAG operations, you might find my latest post at elijah1757.wordpress.com titled, US Cities – Nuclear False Flag provocative.

Ace, thanks for providing a platform.