#AceNewsServices – SUDAN – May 27 – A Sudanese woman awaiting the death penalty for abandoning her religious faith has given birth in jail near the capital, Khartoum, her lawyer has said.

Meriam Yehya Ibrahim Ishag married a Christian man and was sentenced to hang for apostasy earlier this month after refusing to renounce Christianity.

She is allowed to nurse her baby girl for two years before the sentence is carried out.

Born to a Muslim father, she was convicted by a Sharia court.

Sudan has a majority Muslim population, which is governed by Islamic law.

Ms Ibrahim was also convicted of adultery on the grounds that her marriage to a Christian man from South Sudan was void under Sudan’s version of Islamic law, which says Muslim women cannot marry non-Muslims.

For this the judge sentenced her to 100 lashes, which will reportedly be carried out when she has recovered from giving birth.

Ms Ibrahim was raised as an Orthodox Christian, her mother’s religion, because her father, a Muslim, was reportedly absent during her childhood.

That she was arrested and charged with adultery in August 2013, and the court added the charge of apostasy in February 2014 when she said she was a Christian and not a Muslim. 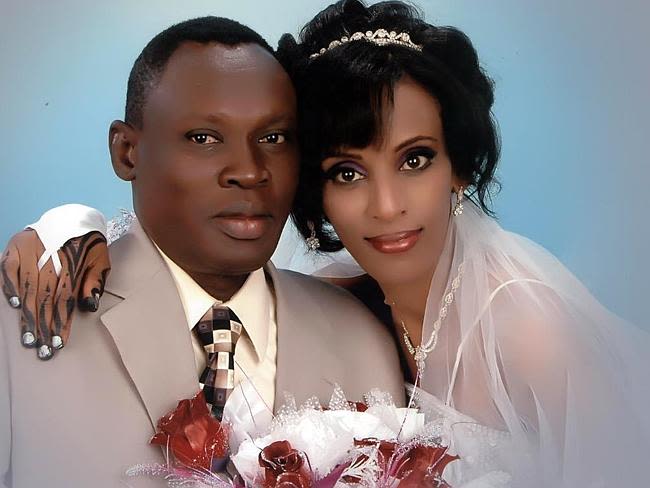 Meriam Yehya Ibrahim, a 27-year- old Christian Sudanese woman, eight months pregnant with her second child, was convicted of ‘adultery’ and ‘apostasy’ by a court in Khartoum on 11 May. Meriam has been given three days by the court to recant her faith.

Her next hearing will be held on 15 May, when she is likely to be sentenced to flogging and death.

Treating adultery and apostasy as criminal offences is not consistent with international human rights law – including the International Covenant on Civil and Political Rights – to which Sudan is a state party. The criminalization of adultery violates the rights to freedom of expression and association and invariably discriminates against women in its enforcement.

The criminalization of apostasy is incompatible with the right to freedom of thought, conscience and religion. Meriam Ibrahim is a prisoner of conscience, convicted solely because of her religious beliefs and identity, and must be released immediately and unconditionally.

Meriam was arrested and charged with adultery in August 2013 after a family member reportedly claimed that she was committing adultery because of her marriage to a Christian South Sudanese man.

Under Shari’a law as practised in Sudan, a Muslim woman is not permitted to marry a non-Muslim man, and any such marriage is considered adultery.

The court added the charge of apostasy in February 2014 when Meriam asserted that she was a Christian and not a Muslim. According to Meriam, she was raised as an Orthodox Christian, her mother’s religion, because her father, a Muslim, was absent during her childhood.

Meriam risks being sentenced to up to 100 lashes for adultery under Article 146.

If she refuses to recant her Christian faith, she risks the death penalty for apostasy under Article 126 of the Sudan Criminal Code.

The punishment of flogging violates the absolute prohibition against torture and other ill-treatment in international human rights law.

Amnesty International considers the death penalty to be the ultimate cruel, inhuman and degrading punishment and a violation of the right to life and opposes its use in all cases and without exception, regardless of the nature of the crime.

#AceWorldNews – UKRAINE – April – On Sunday, the Interior Ministry called on former members of the Berkut riot police, which had been branded as thugs and criminals by the new authorities, to return to service.

“We, the members of the board of Ukraine’s Interior Ministry, address the former members of Berkut. You always were the elite of the security forces,” said the statement of the ministry’s website.

“On the eve of Orthodox Easter we urge everyone not indifferent to the fate of our country, to reconcile and unite, first of all by social consolidation and stopping the strife and mutual disrespect.”

The Berkut special forces units were dismissed on February 25 by the coup-installed Kiev regime.

#AceNewsServices – JERUSALEM – April 19 – The Holy Fire, described by Orthodox Christians as an annual miracle, was lit at the Church of the Holy Sepulchre in Jerusalem on Great Saturday, or Holy Saturday, the day preceding Orthodox Easter.

Thousands of Orthodox Christians filled Jerusalem’s ancient Church of the Holy Sepulchre and spilled out into the narrow streets on Saturday for the “Holy Fire” ceremony on the eve of Orthodox Easter, reports AFP.

Believers hold that the fire is miraculously sent from heaven to ignite candles held by the Greek Orthodox patriarch in an annual rite dating back to the 4th century that symbolises the resurrection of Jesus.

Israeli public radio said around 10,000 faithful attended this year’s ceremony, fewer than in recent years, as police were deployed around the church and in the streets of the surrounding Old City to keep the jubilation from getting out of hand. Source: http://www.pravoslavie.ru/english/52945.htm
© Pravoslavie.Ru

The Patriarch of Jerusalem, Theophilos III, has passed the Holy Fire to the pilgrims, including the Russian delegation, which will deliver it to Moscow.

The Holy Fire, which symbolizes the miraculous light of the Resurrection, has been brought to Russia from Israel every year since 2003.

This year it will be taken for the first time to Crimea, a former Ukrainian region that became part of Russia in March.

#AceWorldNews – SYRIA – April 01 – The situation in Syria’s Christian majority town of Kassab, which was reportedly attacked by Al-Qaeda-linked militants, must be discussed at the UN Security Council, the Russian Foreign Ministry says.

“The UN Security Council should discuss the situation in Kassab and give it a principled evaluation,” it stated.

On March 21, Jihadists reportedly crossed into Syria from Turkey and seized the town in Latakia province, home to over 2,000 ethnic Armenians.

The attack caused hundreds of local families, mainly Armenian, to flee their homes and seek shelter in the city of Latakia.

SYRIA – April 30 – (TS) – Rebels seized control of Kassab on Sunday after launching an attack two days earlier in the coastal Syrian province of Latakia. The fighters were from an array of conservative and Islamic groups, including the Al Qaeda-affiliated al-Nusra Front.

The province has an ancient Armenian presence, but is better known as a bastion of support for President Bashar Assad. It is his ancestral home and that of followers of the Alawite sect, an offshoot of Shiite Islam, that he belongs to.

The clashes led most of Kassab’s estimated 2,000 residents to flee some 57 kilometres to Latakia city, emptying out a village that boasted a Catholic, Orthodox and Protestant church.

“We had to flee only with our clothes. We could not take anything, not even the most precious thing — a handful of soil from Kassab. We could not take our memories,” said a woman to Syrian state television. She identified herself as Kassab resident, but did not give her name.

Volunteers and clergy from Russia’s traditional faiths – Christianity, Islam, Judaism and Buddhism – Orthodox Christian priests, Catholic and Protestant clergy, imams, rabbis and lamas – will be on duty round the clock at the centres in the Coastal, Mountain and Endurance Olympic villages.

“The prayer centres contain separate rooms for Orthodox Christians, Western Rite Christians, Muslims, Jews, Buddhists and Hindus. This is the Sochi Olympics’ advantage over many others, which had only one prayer room for all religions and denominations,” a spokesman for the Russian Orthodox Church told Itar-Tass.

The Moscow Patriarchate also said Orthodox priests had already consecrated their prayer rooms and then visited the headquarters of the Russian Olympic national team, where they worshipped an icon of St. George the Victory-Bearer that has accompanied Russian Olympic teams since 2004.

Roman Catholic Church clerics told Itar-Tass how their prayer rooms would be organized. Priests furnished the rooms themselves, the Roman Catholic Archdiocese of Moscow said.

“There are altars in two of them, crosses, icons of Our Lady of Czestochowa and portraits of Pope Francis hang on walls. The third room in the Mountain Village that will be used jointly with Orthodox Christians also has icons and all necessary items to celebrate Mass, even folding chairs unusual for Orthodox liturgical rooms,” the archdiocese said.

Catholic clerics will arrive from different countries, including together with delegations of foreign athletes.

One of the key concerns for Russia’s Federation of Jewish Communities was to organize kosher nutrition for the upcoming Olympics. “It was hard to provide it, as Sochi had no kosher restaurants until now,” Russia’s Chief Rabbi Berl Lazar said. Now it is possible to order the food in canteens in the Olympic village, and there is special cuisine and a kosher food store in Sochi.

The Council of Muftis told Itar-Tass that their prayer rooms “contain, like it is said in the instructions, separate rooms for prayers by men and women.” Imams working in multi-faith centres will represent the Spiritual Directorate of Muslims of Adygea and the Krasnodar Territory in south Russia. An international halal certification center has checked special food.

The Olympic Committee’s demand is that each faith’s prayer room should have at least two clerics. Volunteers – cultural and religion studies students – will answer questions from visitors, distribute brochures on the history of various religions and show films.

Organizers do not think regular mass divine services would be held in the multi-faith centres. For example, Orthodox priests do not plan to hold liturgy or administer other sacraments in prayer rooms other than the one in the Coastal Village. But each guest will be able to pray or talk to a priest as well as take part in common prayers there.