#AceNewsServices says `Embattled Ukraine: Kiev’s vicious Cycle of Violence Rages, as one protester says – `You want to see `Hell On Earth’ well `Independence Square’ is where it is Happening”

A trade union building is seen on fire in Independence Square in central Kiev February 19, 2014. (Reuters / Vasily Fedosenko)
Rioters and police in central Kiev are exchanging smoke and stun grenades, as a fresh wave of violence is gripping the Ukrainian capital. While the rioters have no clear demands, the opposition keeps pushing for the president’s resignation.

16:06 GMT:
The United States and the European Union are discussing the possibility of imposing sanctions on Ukraine “to try create conditions for compromise,” Reuters reports citing US Secretary of State John Kerry.

15:45 GMT:
Nearly 800 people have been injured in violent clashes in Kiev, including 392 law enforcement officers, the deputy chief investigator of the Ukrainian Interior Ministry, Oleg Tatarov, told foreign ambassadors at a Wednesday meeting. He added that 83 of the injured officers have been hospitalized with serious gunshot wounds.

15:29 GMT:
The US imposed sanctions on Ukraine on Wednesday, having canceled visas for several officials, who supposedly were connected with the use of force in central Kiev, according to the US Ambassador to Ukraine, Geoffrey Pyatt.

15:29 GMT:
Polish Foreign Minister Radoslaw Sikorski says he is heading to Ukraine on Wednesday on behalf of the European Union.

German Chancellor Angela Merkel says the imminent threat of sanctions against the Ukrainian government was meant to show Kiev that the European Union is serious about the need for a return to political dialogue.

“When (EU) foreign ministers meet tomorrow in Brussels they must talk about which specific sanctions should be imposed to show we are serious that the political process must resume...,” she told a news conference with French leader Francois Hollande, adding that it was necessary to talk to both the opposition and Viktor Yanukovich’s government to help bring peace to Ukraine. (Reuters)

The responsibility for the deadly riots in Ukraine lies not with extremists alone, but also with the leaders of the Ukrainian opposition and some Western politicians, Russian Foreign Minister Sergey Lavrov has said.

Rioters have captured and beaten the governor of the western Volyn Oblast, Aleksandr Bashkalenko, and are demanding that he resigns. According to reports in Ukrainian media, Bashkalenko was handcuffed to a stage in front of a crowd of about 10,000 people and was doused with cold water but refused to sign his resignation. Earlier, he was beaten for refusing to kneel before the people, but a group of organized rioters averted a lynching by the angry mob by taking the governor into a police station.

Ukraine’s security service has announced it is launching a counter-terror operation, RIA Novosti reports. The service that said radicals have seized over 1,500 firing arms and 100,000 bullets in the last 24 hours.

In the Lithuanian capital of Vilnius, people are lighting candles to commemorate the victims of the deadly clashes in Kiev.

Smoke is covering no man’s land between the crowd of protesters on Independence Square (Maidan) and the police cordons. Protesters are burning tires as riot police constantly regroup behind the lines of interior troops surrounding the square. A spurt of water can be seen firing in the direction of the barricades.

Meanwhile, the fire raging in the House of Trade Unions has apparently gone out, but the smoke keeps issuing from several charred floors.

The European Investment Bank (EIB) said on Wednesday it had frozen its activities in Ukraine after at least 26 people died in the worst violence since the former Soviet republic gained independence. “For the time being the situation is so cruel that it would be politically the wrong signal, but also irresponsible vis-a-vis the people we asked to do the job, to be active on business in Ukraine,” EIB

“I reiterate my call for respect for the right to peaceful assembly, as provided under international human rights law, to be respected. I also call for an urgent and independent investigation to establish facts and responsibilities, including the possible use of excessive force, and to ensure accountability for these deadly clashes,” Pillay said in a statement.

13:00 GMT:
At least 751 people have been injured in the latest surge of violence in the Ukrainian capital of Kiev, Itar-Tass quotes Interior Ministry officials as saying. Since Tuesday, 26 people have been killed in clashes, including 10 police officers, with many of the victims perishing from gunshot wounds.

12:39 GMT:
Forty criminal cases have been launched and 58 people detained all in all following the latest violence that’s gripped Kiev, according to the Ukrainian Interior Ministry.

12:34 GMT:
Crimean MPs are considering bringing up the question of returning the peninsula to Russia if the escalation of violence in the country continues.

The local deputy of the ruling Party of Regions, Nikolay Kolisnichenko, has addressed the Supreme Council of the autonomous republic saying that “if the situation in Ukraine is not resolved, we as deputies must raise the issue of returning Crimea to Russia,” local media quotes the MP as saying.

The Crimean peninsula was transferred from the Russian Soviet Federative Socialist Republic to the Ukrainian Soviet Socialist Republic in 1954. Following the breakup of the Soviet Union, Russia continued to lease part of the ex-Soviet naval base in Sevastopol for its Black Sea Fleet. According to the latest 2001 survey, 58.5 percent of the Crimean population is Russian.

Up the hill from the Kiev’s Independence Square, the protesters receive medical treatment and are given shelter at St. Michael’s Cathedral, which has been turned into a makeshift hospital and refuge.

The EU is expected to agree on Ukraine sanctions shortly, according to European Commission President Jose Manuel Barroso, as quoted by Reuters.

“We have … made it clear that the EU will respond to any deterioration on the ground. We therefore expect that targeted measures against those responsible for violence and use of excessive force can be agreed by our member states as a matter of urgency,” Barroso said in a statement.

The EU is to hold an extraordinary foreign ministers’ meeting on Thursday.

The incumbent Defense Minister of Ukraine Pavel Lebedev said he couldn’t guarantee that the military forces won’t interfere in the conflict. Lebedev has confirmed that he “made an order” to send landing troops from the central Ukrainian city of Dnepropetrovsk to the capital, Kiev.

However, the Defense Ministry later denied that any military units were being relocated to disperse protesters in Kiev, as quoted by Itar-Tass.

The number of the dead officers from the violent clashes between police and protesters in Kiev has risen to 10 people,

Ukrainian Olympic chief and former pole vault champion Sergey Bubka on Wednesday called for an end to violence in his country as Ukrainian athletes struggled to focus on competing at the Sochi Winter Games.

“I want to bring Olympic Truce to my country,” Bubka said on Twitter. “Dialogue is power, violence is weakness.

“Our athletes are competing hard in Sochi, but peacefully and with honour. Violence has no place in the world,” said Bubka. (Reuters)

Ukraine’s President Viktor Yanukovich announced on Thursday, February 20, a day of mourning for those who have died in the Kiev insurgency. The latest reports from Ukraine suggest that 25 people, including nine police officers, have perished in clashes. Over 70 law enforcement officers suffered gunshot wounds. The number of injured in the riots is measured in the hundreds.

European Union foreign ministers will hold an emergency meeting on Ukraine in Brussels on Thursday, an EU official said.

The ministers are expected to discuss imposing sanctions on people responsible for violence and the use of excessive force during protests in Ukraine, which killed at least 25 people. (Reuters)

“Military men who stand up for the legitimate state rights to ensure the law and order, as well as the civilian population, are among the dead and injured,” the statement goes on to say.

10.13 GMT: The blood was spilt in Ukraine due to the criminal activity of radical opposition forces, Russia’s Foreign Ministry has said in a statement. Russia demands the opposition leaders stop the bloodshed and immediately renew negotiations with the legitimate government without threats or ultimatums.

statement goes on to say.

09.57 GMT: Ukraine’s Interior Ministry says that the victims of the riots in Kiev could have been killed by radicals, as the country’s security forces don’t use firearms.

“Judging by the type of wounds the killed people have (non-perforating wounds, wounds in the back of the neck), as well as by the weapons we confiscate, it can be supposed that this bodily harm might have been caused by aggressive radical rioters,” the statement on the ministry’s website stated.

“The employees of police, as well as Interior Ministry security forces of Ukraine, don’t use firearms, only non-lethal weapons,” the statement underlined.

“I will today hold talks with the leaders of the biggest EU countries and institutions, and persuade them to impose sanctions – personal and financial,”Tusk told a special session of the Polish parliament, as quoted by Reuters.

“I hope that such a stance from Poland will help the EU in making fast decisions,” he added.

Over 50 people have been detained over the rioting in Kiev during the last 24 hours, Ukraine’s Interior Ministry told Interfax.

Four hundred people are participating in the rally taking place in the city of Simferopol, situated in Crimea. The demonstrators demand the government to take the necessary measures to stop the violent riots in Kiev, RIA Novosti reported.

Among those killed in the rioting in Kiev were three employees of Ukraine’s Interior Ministry from the southern Ukrainian Autonomous Republic of Crimea.

Radical protesters have announced the mobilization of their forces on the Kiev’s Independence Square, to prepare for new clashes with law enforcement authorities. The radicals demand to “bring to the barricades everything that will burn and can reinforce them,” as quoted by Itar-Tass news agency.

“This is not a rally, this is an organized military confrontation,” the organizers added.

Radicals are blocking the checkpoints at the Ukrainian border, the country’s border control said, as quoted by Interfax news agency. In particular, about 40 people blocked the road near the UkrainianPolish border, placing tires and other objects to interfere with the passing of vehicles.

According to border control, there are already a dozen of trucks lined up at the scene.

“If you want to see what hell on Earth looks like, you just look at the Kiev’s Independence Square, it looks like a boiling pot: with … burning tires, wood planks and everything the protesters have in store.… Moreover, behind a cloud of black smoke is [coming from] the building which has formerly been the Trade Union Headquarters in Kiev. For the past two months, it was the revolutionary headquarters with the opposition parties’ representation there,”RT’s Alexey Yaroshevsky reported from the Kiev’s Independence Square.

The building is “almost completely burnt down,” and now reports emerged that“the stories of the building are collapsing, so it may go down any minute,”Yaroshevsky added.

“We haven’t seen any actual brutal and violent attempts by the police to disperse the protesters,” he also said.

The Ukrainian Orthodox Church has called on the government and opposition to start a dialogue and put a stop to the violence in Kiev, which has already put the country “on the brink of a national catastrophe,” according to the statement on the Church’s website.

There are no foreign citizens among the victims of the Kiev clashes, the Health Ministry stated. 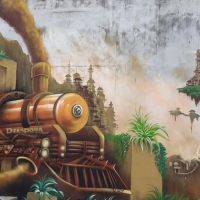