#AceNewsReport – WASHINGTON:June.11: Alexander Brazhnikov, a naturalized US citizen born in Moscow, has admitted obtaining and smuggling sensitive electronic components worth $65 million from the United States to Russia, US Attorney Paul Fishman said in a press release on Thursday.

Under questioning by a federal prosecutor, Brazhnikov admitted that between January 2008 and June 2014, he conspired to export 1,900 shipments of high-tech electronics components valued at $65 million to Russian defense contractors who supply Russian military and security forces.

“As he admitted in court, Brazhnikov was responsible for nearly 2,000 illegal shipments of regulated, sensitive electronics components, many of which wound up in the hands of Russian military and security forces,” Fishman said.

Brazhnikov admitted concealing the actual contents of the shipments, which were, in several instances, sent to the addresses of vacant apartments in Moscow.

Brazhnikov is a US citizen who has been in the country since the age of 22. He owned microelectronic exports companies in Carteret, Mountainside, Union and Manalapan.

He lives in Mountainside with his wife and two daughters.

His attorney, Jack Arsenault, said his client was enlisted by his father of the same name. He said his father, who is in Russia and has not been charged, turned his back on his son after his arrest in June 2014.

#AceWorldNews says this post outlines the tie up between three parties, #NSA for Spying, #Darpa for the defence and research into robot’s as future warfare machine, where games become reality and #Google as the robotics provider and computerization techniques.

Google has spent the last decade building databases on everything, including each and every computer-using American citizen. Now it intends to join forces with the United States Military to put all that info to good use. The giant “swooshing sound” you are hearing right now is the major leap forward of the Mark of the Beast.

This development invites attention to Google’s broader military contracting ambitions — especially since Boston Dynamics is the eighth robotics company that Google has bought in the last six months. 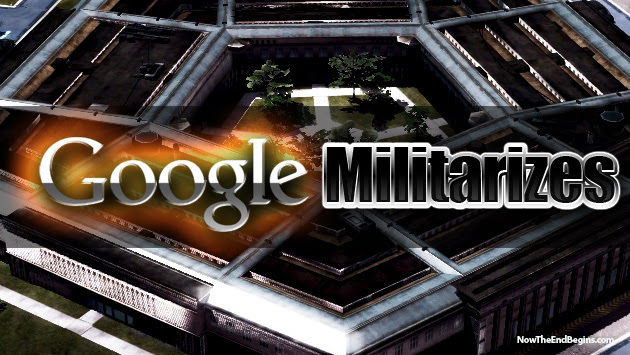 Just like drones are the future of air warfare, humanoid robots and self-driving vehicles will be the future of ground warfare according to U.S. defense plans.

There are many other reasons why the U.S. military is on path to become Google’s single largest customer. Likewise these reasons indicate Google has a closer working relationship with the NSA than it acknowledges publicly.

First, consider the military value of Google’s research and development efforts and the military contracting pipeline revenue it could represent.

Tellingly, the purpose of the original “moon-shots” by the Soviet Union and America was military. The two Cold War superpowers were in a “space race” to publicly showcase the technological and military supremacy of their rival ideologies.

Simply, America’s Cold War “moon-shot” was about winning the military space and arms race with the former Soviet Union.

Even more tellingly, the greatest application for almost all of Google X’s “moon-shot” technological efforts — are military. Like drones, self-driving vehicles, and robot soldiers could enhance military surveillance and payload delivery while reducing risks to military personnel.

English: This was the most up-to-date DARPA logo as of January 2009. It is obsolete now. (Photo credit: Wikipedia)

In 2012, Google hired Regina Dugan, the head of DOD’s Defense Advanced Research Projects Agency (DARPA), DOD’s in-house “moon-shot” idea factory. At the time a Google spokesperson said: “Regina is a technical pioneer who brought the future of technology to the military during her time at DARPA.  She will be a real asset to Google.”

Simply, few people could have a better insider knowledge of the U.S. military’s future technology needs that Google could exploit than Ms. Dugan.

Third, Google has a long history of working for, and with, the NSA and the other U.S. intelligence services.

In 2004, Google purchased satellite mapping company Keyhole, which was strategically important enough to be funded by the CIA’s investment fund In-Q-Tel. Google turned the aptly named “Keyhole” surveillance capability into the wildly popular Google Earth and Google Maps service used by over a billion people and over one million websites.

In 2008, the San Francisco Chronicle reported that U.S. spy agencies use “Google equipment as the backbone of Intellipedia, a network aimed at helping agents share intelligence.” The article also reported that Google had a support contract with the NSA.

Fourth, Google has too many unique capabilities and metadata sets that are of strategic value to the NSA to believe Google’s denials that it does not work closely with the NSA

Snowden’s NSA revelations have underscored the high value the NSA puts on collecting the metadata of who is communicating with whom, when, where, and how much.

Remember Google is metadata central. It is veritable surveillance catnip for the NSA Think about it. Google’s cookies track the Internet behavior of nearly 2 billion people. Over a billion people regularly use Google Search, Maps, Android, and YouTube. And about a half billion people use Gmail and Google + social media.

Thus Google has the unique capability to surveil for the NSA the online behavior of a targeted group of people by country, language, interests, keywords, names, communications, physical location, movements, time and more.

Simply put, Google’s world’s largest computer already can do what the NSA wants to do most.

Add to all this Google’s unique capability to instantaneously translate 80 different languages across applications, and why wouldn’t the NSA covet a close working relationship with Google?

Finally, the behavior of America’s greatest military rivals, Russia and China, speaks volumes about the likely extent of unreported close cooperation between Google and NSA/DOD.

Remember it was the U.S. Defense Advanced Research Projects Agency that invented the Internet in the early ‘70s. It is no coincidence that Russia and China have been the most hostile to allowing Google’s Internet dominance to extend into their countries.

In summation, the accumulating evidence indicates that the U.S. military is on path to become Google’s single largest customer.

Page’s strategic positioning of Google’s biggest investments to strongly align with future U.S. military needs are no coincidence. It is likely tacit confirmation of a much stronger relationship than Google has acknowledged to date.

Page’s creeping militarization of Google will increasingly become problematic for the privacy of Google’s foreign users, which generate over half of Google’s revenues. While U.S. law purportedly prevents the #NSA from surveilling Americans without a warrant, the NSA’s official mandate is to surveil foreign signals intelligence.

Scott Cleland is President of Precursor LLC, a consultancy serving Fortune 500 clients, some of which are Google competitors. He is also author of “Search & Destroy: Why You Can’t Trust Google Inc. Cleland has testified before both the Senate and House antitrust subcommittees on Google and also before the relevant House oversight subcommittee on Google’s privacy problems.

U.S. Central Command arrived at the figure of 75,000 ground troops as part of a written series of military options for dealing with Bashar al-Assad more than 18 months ago, long before the U.S. confirmed internally that the Syrian dictator was using the weapons against rebel factions within his borders.

‘The report exists, and it was prepared at the request of the National Security Advisor‘s staff,’ a Department of Defense official with knowledge of the inquiry told Mail-Online Wednesday on condition of anonymity.