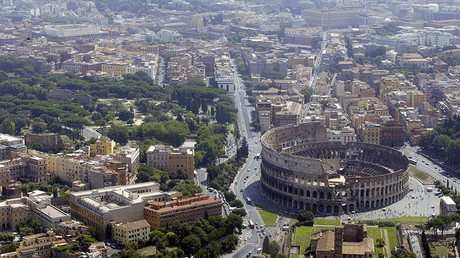 A 5.4-magnitude earthquake hit a rural area of central Italy on Wednesday evening, with the impact felt as far away as Rome. Buildings across the region have been damaged, but so far, there have been no reports of fatalities.
Second #quake strikes central #Italy, 6.4 magnitude – USGS on.rt.com/7t14 #earthquake

#AceNewsReport – AUSTRALIA:July.30: A rare 5.7-magnitude earthquake struck off the south-east coast of Queensland in Australia on Thursday morning, US Geological Survey (USGS) reported.

Tremors were felt in Bundaberg, the Sunshine Coast, Brisbane, and the Gold Coast. The epicenter of the quake was in the Coral Sea at a depth of 10 kilometers.

The first reports began coming in at 9:41 am local time. Police said that no damage has been reported, and no tsunami threat has been issued.

The quake has been described as historic since earthquakes are very rare in this part of Australia: the previous tremor of a similar magnitude struck the area in the 1930s.

The quake’s epicenter was at a depth of 46.9 kilometers. No tsunami threat has been issued.

Earthquakes in eastern Indonesia occur rather frequently due to its location on the Australia-Pacific plate boundary.

The earthquake hit on Wednesday at 11:58 GMT southwest of Haines, which has a population of over 2,500 people. The epi-center was 10km deep, according to United States Geological Survey.

The quake was first reported at a magnitude of 5.8, however it was subsequently downgraded to 5.7.

There have been no reports of casualties.

The circum-Pacific seismic belt, the earth’s most active seismic feature, brushes Alaska and the Aleutian Islands, resulting in frequent earthquakes. More than 80 percent of the planet’s tremors occur in the circum-Pacific belt, according to USGS data.

Just woke up to a 5.8 earthquake off the coast of Alaska near Juneau. Felt the house shake here in Whitehorse 200 miles away

One of the strongest earthquakes in the history of Alaska occurred in the Anchorage area on March 27, 1964, according to the USGS.

The magnitude was recorded at 8.5 on the Richter scale, then recalculated to 9.2, while the shock devastated down-town Anchorage.

It was followed by a tsunami that destroyed many of Alaska’s coastal towns and spread along the West Coast of the United States and Canada, and as far as Hawaii.

One hundred and twenty-two were drowned by the ensuing tsunami waves – 107 in Alaska, 11 in California, and four in Oregon.

The epicentre of the tremor was located at a shallow depth of 10 kilometres, just 27 kilometres from the town of Pingyuan in Yingjiang County.

Local authorities sent a team of over 50 people for surveying, investigation, and disaster evaluation, Xinhua reported.

There have been no immediate reports of casualties or damage.

The county borders Myanmar and has a population of 300,000.

The depth of the quake was located at 45.5 kilometres.

The closest city to the epicentre is Panguna, 62 kilometres away.

Currently there are no threats of a tsunami.

#AceWorldNews – WYOMING – March 30 – A 4.8 magnitude quake rocked Yellowstone National Park in Wyoming near the border with Montana, the US Geological Survey said.

There were several aftershocks with a magnitude over 3.

The quake was centred almost in the middle of Yellowstone National Park, near the Norris Geyser Basin, said Peter Cervelli, a spokesman for the USGS Yellowstone Volcano Observatory, NBC News reported.

He added that any damage from the tremor would likely be minor, noting there are not many visitors in the park at the moment.

There were no immediate reports of damage.

According to USGS there were four aftershocks recorded with a magnitude from 3.1 to 3.3.

The USGS said that more are expected.

#AceWorldNews – LOS ANGELES – A magnitude-5.1 earthquake centred near Los Angeles caused no major damage but jittered nerves throughout the region as dozens of aftershocks struck into the night.

The U.S. Geological Survey said the quake struck at about 9:09 p.m. Friday and was centred near Brea in Orange County – about 20 miles south-east of down-town Los Angeles – at a depth of about 5 miles.

It was felt as far south as San Diego and as far north as Ventura County, according to citizen responses collected on-line by the USGS.

#AceWorldNews A magnitude 7.0 earthquake has hit the Pacific coast of Chile, the U.S. Geological Survey said.

The epicentre of the quake was located 70 km north-west of Iquique in northern Chile, at a depth of 32 km, the USGS said.

No injuries or damage have been reported so far.

#AceBreakingNews A 6.3 magnitude earthquake has struck off the south coast of Japan, 13 kilometers north of the city Kunisaki-shi, located on the southern Kyushu Island, according to the US Geological Survey.

The epicenter fell at a depth of 82.9km, striking off the coast at the intersection between Kyushu, the main island of Honshu, and Shikoku, at 2:06 a.m. on Friday (1706 GMT on Thursday).

A 6.3 earthquake is capable of causing ‘serious damage’, according to the USGS, while earthquakes measuring between 6.0 and 6.9 on the Richter scale can be felt up to hundreds of kilometers from the epicenter.

The quake struck 36 km south-south-west of the city of Hikari, western Honshu, which has a population of over 50,000 people.

No reports of damage or casualties have immediately followed. The USGS has released a pager ‘green’ alert, meaning that “there is a low likelihood of casualties and damage.”

This is at present an unconfirmed report and waiting for further information …….

AceWorldNews says an earthquake of 6.7 magnitude struck off the Pacific island nation of Vanuatu on Friday, Reuters reported, citing the US Geological Survey (USGS). The depth of the earthquake was 101km.

No casualties or damage were reported, and the Pacific Tsunami Warning Center said the quake was too deep to generate a tsunami.