#AceWorldNews – WEST BANK:Dec.12 – An alleged Palestinian attacked a six-person family from Beitar with acid on Friday near the West Bank town of Husan, the Jerusalem Post reported.

The four children and two parents suffered light injuries and remain in a fair condition.

The injured were treated on site before being evacuated to Hadassah University Medical Centre in Jerusalem.

The suspect remains in a serious condition after being shot in the leg by security forces at the scene.

Jerusalem police earlier increased deployment in the city over the threat of riots following the death of a Palestinian Authority minister.

RICHMOND, Va. — The family of an 8-year-old boy beaten to death as he tried to defend his 12-year-old sister from a brutal rape gathered outside their home Friday, grappling with the details of the vicious attack. They leaned on one another, crying, shaking and struggling to understand the loss of little Martin Cobb. “He was a lovely little boy. He didn’t deserve this,” said Geraldine Pitchford, the children’s aunt, choking back tears in front of the family’s home in Richmond’s working-class Southside. Martin’s mother was too distraught to come outside.

An 8-year-old Virginia boy was beaten to death Thursday trying to defend his 12-year-old sister from a brutal rape, police and relatives said.

“I’m still trying to make sense of this senseless crime,” Pitchford said. “I couldn’t fathom the thought of this ever happening.” The neighborhood’s calm was shattered Thursday, when police rushed to the home at 6:30 p.m. The brother and sister had been playing on train tracks behind the family home’s backyard. The suspect approached the pair, who often played together, and attempted to sexually assault the girl, police said. Martin tried to help his sister, and the suspect struck him in the head with a brick, reported media outlets. He died at the scene. His sister was recovering Friday at VCU Medical Center and was feeling “OK,” the family told NBC News.

Family and loved ones pray after 9-year- old is killed, sister raped, in Southside 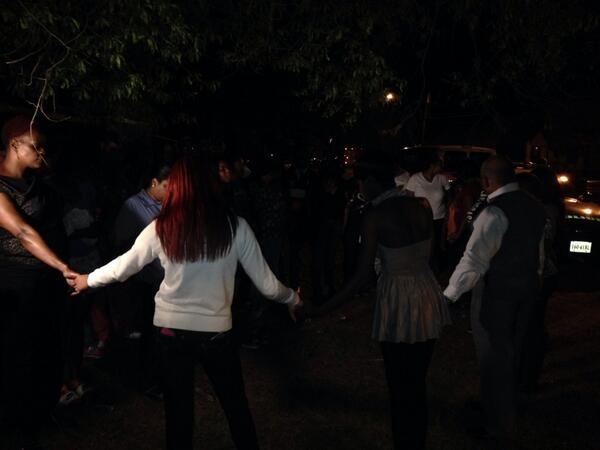 Police hunted for the suspect Thursday night. Initially, he was described as a white male with scraggly facial hair. But Dionne Waugh, a spokeswoman for the Richmond police, told NBC News the description was false because the victim was told her family would be harmed if she gave a true description. With the help of outraged neighbors, police identified a male teenage suspect. He was being medically evaluated Friday with a warrant for his arrest pending. “The community’s response has been tremendous,” Waugh told NBC News. “They played a very important role in gathering information to lead us to this point.” Waugh called the assault and killing grisly and heartbreaking — “probably one of the most tragic cases” she’s ever encountered. “Every loss of life here is tragic, [but] whenever it’s a case involving juveniles, it’s especially hard for everyone involved, from our detectives to our fire and ambulance personnel, who are often first on scene,” she said. “So it’s been a challenge, I think, for a lot of people here.” Martin was a first-grader at Elizabeth D. Redd Elementary School. A picture released by the family shows the boy in a matching gray vest and pants, his hands stuffed into his pockets.

Community shocked: The siblings were playing by the train tracks along Brandon Road in Richmond Thursday when a stranger came out of nowhere and attacked the 12-year-old girl

He played with cars and collected keys. He and his older sister were inseparable and were often the last ones to go back inside because they loved playing together, the family said. “There was not one person around here who didn’t know him,” Pitchford added. Neighbor Tracy Lightsey said Martin was trying to fight off the suspect during the attack, his family told her “He felt like he was his sister’s protector,” Lightsey told the Richmond Times-Dispatch. “He was his sister’s keeper till his death.” A vigil is planned for 7:30 p.m. Saturday at Abundant Life Church in Richmond. A memorial fund called the Keys for Marty Foundation has been established; donations can made by at any Wells Fargo bank branch.

I saw this video today on YouTube and just had to provide a post, about the discipline applied in certain schools in the US and before you watch ,it is very graphic and may upset certain people!

The fact that “Special Needs Children” are being locked up for hours on end to be able to teach them a lesson, defies all morality!

At 5:06, the kids themselves describe their own experiences. That should be all you need to hear to understand something is seriously wrong here. Barnet Civil and Family Court Centre on Regents Park Road, Finchley. It is a civil and family courts centre. The building’s address is St Mary’s Court, and the photographer believes that there used to be a school of the same name on this site. (Photo credit: Wikipedia)

A move has been a foot for many a year whereby successive governments have tried to find a family friendly way to deal more effectively, with family disputes over children! Some cases have dragged out over many weeks and months and of course costs have spiraled out of control. So sooner rather than later something had to be done.

The news today provided an insight to the new system and its implementation and l have added an extract or flavour of what has been published!

Proposals to change the culture of family courts and speed up cases in England and Wales have been published. The plans include a single family court run by judges and magistrates to replace the current system where judges sit in multiple court buildings. Family courts often deal with child custody cases following divorce or separation. The “time-wasting” use of expert witnesses is to be cut substantially. There will be a time limit of 26 weeks for all but exceptional cases involving children’s futures. Last spring, the average case took 57 weeks, falling to 51 weeks in the last quarter. The Mail hopes that the issue of secrecy in family courts is addressed: “But would it be asking too much if he might address the veil of secrecy that hangs over family courts – all the more worrying, since the numbers of children in care have surged by 10,000 to 30,000 since the horrifying Baby P case in 2008? Yes, children’s identities must be protected. But transparency and publicity are always the strongest shields against miscarriages of justice.”

The fact that we are looking at reducing time taken to process these cases seems on the face of it, an excellent way but by cutting the time in these types of cases, leads to problems! The wasted time as it has been called provides the judges with a broader picture of certain cases,as a number of key facts, do not always come to light until late into the case! This golden opportunity would be lost and mistakes on custody of vulnerable children, may well be awarded to the wrong person. This may lead to further court cases, causing further trauma for both the child and the other parties concerned.We are not simply dealing with cases of theft or even a simple divorce [ Not that these cannot be long drawn out] but in these cases a young, vulnerable child!

The second point is the issue relating to secrecy and to numbers of children in care, is it not better that a child is put into care, either short-term or long if the welfare of that child is threatened. Let us be honest with ourselves at this point, do we not live in a precarious world of bad if not in some cases evil people. Who prey on these types of children as a vent for some twisted ideas, laid upon them by their parents or lack of good parental control! When l was young we called this ” falling in with the wrong crowd” well it has got worst not better! So some veil of secrecy must be up held as protection against these types of people and much worse using cases like this to further their own ends! We all know how much money can be made with a good story, some unscrupulous journalists hang onto a story like a ” dog with a bone ” holding on to every bit of it, just to make their facts fit a story!

Finally and the reason for my heading for this story and what is behind it all! Whenever changes to policies in government take place they have a monetary aspect, as l said by the fact cases drag out over many months! The related costs of ” legal aid” can run into hundreds of thousands of pounds and it all has to be paid for by the good old taxpayer! Well in these austere days for some, our politicians can make us feel better with words like, WE CARE, WE WANT TO HELP and my favourite WE WANT TO SAVE THE TAXPAYER MONEY! So by proposing SWEEPING changes and a DRASTIC overhaul they will be able to save money, for WHO and at WHAT COST!

This could lead to SWEEPING AWAY THE LEGAL AID SYSTEM so if you can pay and remember the costs for private legal services are much higher for the legal eagles. Then with no system of help for the less well off, we will see a lot more miscarriages of justice in this country.

So l for one look for many more of these ” Sweeping Changes and Drastic Overhauls ” and will report as l see them occurring!