#AceWorldNews – NORTHERN IRELAND – July 12 – Tens of thousands of Orangemen and women are taking part in 12 July celebrations across Northern Ireland.

There were no incidents as a feeder parade passed a sectarian flashpoint at shops in Ardoyne in north Belfast.

The main Belfast parade has made its way through the city centre where there is a large police presence.

All the parades stopped for six minutes in protest at the Parades Commission determination on the return of the north Belfast feeder parade.

There was a small protest outside St Patrick‘s Catholic Church in Donegall Street, where bands played a drum beat rather than hymns or loyalist tunes.

The 12 July is traditionally the biggest day in the Protestant marching season – running from April to August – with main 17 parades and several feeder parades taking place this year.

They mark King William III‘s victory over Catholic King James at the Battle of the Boyne in 1690.

While most parades proceed without incident, some that pass nationalist areas are controversial.

Around 20 residents stood outside Ardoyne shops in north Belfast as the Orange Order parade passed on Saturday morning.

The residents said they were there to observe, not to protest, and the march was not obstructed.
#ANS2014

#AceBreakingNews – NORTHERN IRELAND (Londonderry) – May 30 – A Northern Ireland hotel was damaged in a bombing late on Thursday that politicians said was an attempt to drag the province back to its bloody past, but there were no injuries.

(Irish Times) – The device was thrown into the reception of the Everglades Hotel in the Prehen area of Derry by a masked man last night. 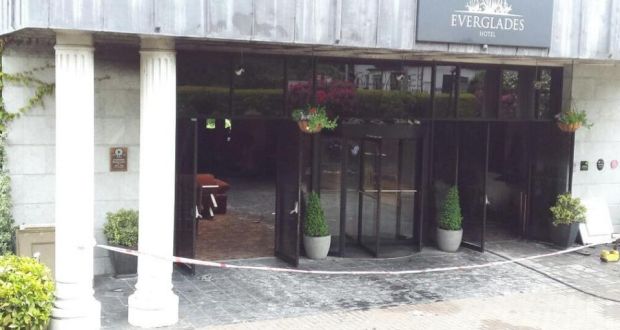 A 1998 peace deal largely ended three decades of violence in Northern Ireland between Protestants who want to remain British and Catholics favouring unification with Ireland, but pockets of division and sporadic violence remain. A device packed into a holdall bag started a fire after it was thrown into the reception of the luxury Everglades Hotel in Londonderry. Staff managed to evacuate the hotel before the device exploded, “undoubtedly preventing a tragedy”, a Northern Ireland police spokesman said.

The bomb went off while disposal experts were trying to defuse it. It was the first attack in Northern Ireland since the bombing of a shopping mall in November and there was no immediate claim of responsibility or explanation of why the hotel was targeted.

“So many people are working hard to move the city forward, but those behind this device are trying to drag us back to the worst times,” local member of parliament Mark Durkan of the republican SDLP party said in a statement.

Northern Ireland deputy first minister Martin McGuinness of Sinn Fein, once a leading figure in the Irish Republican Army (IRA), condemned the attack and said his home-town of Londonderry would not be held back by those living in the past.

In the past two weeks, police in the Irish Republic have seized two substantial bombs and made a series of arrests before the devices could be shipped across the border into Northern Ireland for use.

The hotel attack came hours after a new Chief Constable of the Police Service of Northern Ireland was appointed.

Some people fancy all health care debates to be a case of Canadian Health Care vs. American. Not so. According to the World Health Organization’s ranking of the world’s health systems, neither Canada nor the USA ranks in the top 25.

Improving the Canadian Healthcare System does not mean we must emulate the American system, but it may mean that perhaps we can learn from countries that rank better than both Canada and the USA at keeping their citizens healthy.

Note: My Country, Scotland ALWAYS gets thrown in with the British average. Scottish NHS (National Health Service) is a lot better than England’s

#AceUKNews – NORTHERN IRELAND – April 19 – A 26-year-old man has been arrested in Northern Ireland after the shooting of a prominent republican hard-liner. Tommy Crossan, a senior member of the Continuity IRA, was fatally shot on Friday afternoon in west Belfast.

Tommy Crossan, a former leading figure in the Continuity IRA (CIRA) was gunned down in an office at a fuel depot in the grounds of an industrial complex on Friday.

The Police Service of Northern Ireland (PSNI) said the arrested man was held in west Belfast by officers from its Serious Crime Branch and is being questioned at a police station in Antrim.

A priest attended to pray over Crossan, 43, after he was shot in West Belfast, an area long known as a republican heartland but which has been relatively peaceful in recent years, following the end of the IRA campaign in 1998.

Alex Attwood, West Belfast MLA for the nationalist Social Democratic and Labour Party (SDLP), suggested three gunmen carried out the killing and detectives are examining the possibility that rival republican dissidents were involved in the murder.

Crossan had been strongly opposed to the 1998 peace deal. Northern Ireland has been predominantly peaceful since the signing of the Good Friday agreement.

However, there have been occasional outbreaks of sectarian violence, which have intensified over the past 18 months.

More than 3,600 have died in sectarian troubles between Catholic Irish nationalists and union protestants who wish to remain part of the UK since the ‘troubles’ began in the 1960’s.

AceBreakingNews – BRITAIN – April 10 – (BBC) – One of four men ordered to pay more than £1.5m in damages to the families of those killed in the Omagh bombing has been charged with involvement in the attack.

The Real IRA bomb that killed 29 people in 1998 was the worst single atrocity of the Troubles in Northern Ireland.

Seamus Daly, 43, from Culloville in County Monaghan, was arrested on Monday in Newry, County Down.

He was charged on Thursday in connection with the attack.

No-one has ever been convicted of carrying out the bombing in a criminal court.

However, relatives of some of the victims brought a civil action against five men they claimed were responsible, including Seamus Daly.

The court ruled that he and three of the others were responsible, and they were later ordered to pay more than £1.5m in damages.

Among those killed in the attack was a woman pregnant with twins.

Seamus Daly has always denied any involvement in the bombing.